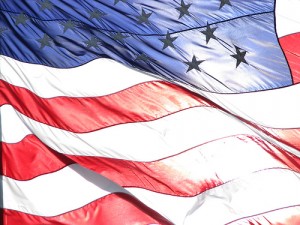 Ever since I traveled to Philadelphia a few years ago, my thoughts wander to the birthplace of the United States on July 4th. Even cynics may have a hard time remaining unmoved by the Fourth of July celebrations after reading this book.

This book takes us beyond 1776 to 1787 and the Constitution that finished the job started by the Revolutionary War.

The book Miracle at Philadelphia by Catherine Drinker Bowen takes its name from a quotation by George Washington.

“It appears to me, then, little short of a miracle, that the Delegates from so many different states (which States you know are also different from each other), in their manners, circumstances and prejudices, should unite in forming a system of national Government, so little liable to well founded objections.”

I read this book in a special slip-covered edition published for the bicentennial–yes, way back in 1976. I will never forget the way the book helps you travel back through time. I could see images of the framers of the Constitution meeting in the sticky summer heat in Philadelphia, windows shut so that rumors would not leak out.

The arguments flew.  Some were hot-headed, some conciliatory, as they tried to get their minds around new ideas–a new form of government.  They knew they could not continue as scattered communities along the Eastern shore. But how to solidify independence, now they had won it? Some sort of government must substitute for the former Royal colonies.

The previous arrangement suited some people just fine, but for safety and for economic reasons, they knew that they must band together.

It is safe to say that when they started talking, none expected their actions to lead to a national government. And even when they finished, none realized how long their Constitution would last and how strong it would prove to be.

The gathering in Philadelphia needed to deal with economic self-interest, but surely more lofty goals and thoughts of the rights of man entered into their thinking. Shouldn’t this new country have a king? some wondered. Would it be safer to have a committee at the head?  How to be fair to large states and small?

“The situation of this assembly–groping as it were in the dark to find political truth,” said Benjamin Franklin.

Miracle at Philadelphia traces the Federal Convention from May to September of 1787, introduces life in various states, and ends with the year it took to get ratification of the Constitution of the United States.

I love this book because it reminds me why we celebrate the 4th of July. Yes, Independence Day celebrates a Declaration of Independence, but without the Constitution, that would have been a hollow victory.

As I read, I mind-travel to Philadelphia as the book brings to life all the men who formed the Constitution, their struggle and their triumph.  And marvelously, you can travel to the same city and stand in the same hall where they debated. You can eat at a Philadelphia restaurant (the City Tavern) that recreates the one that stood on the spot where delegates met to have a pint. You can stay in a Philadelphia hotel across from that restaurant that dates to the late 1700s (the Thomas Bond House)

It is exciting to walk in the footsteps of those who wrote the Declaration of Independence and the Constitution, whether on the 4th of July or some other day.  When you go to Philadelphia, please also visit the new National Constitution Center on Independence Mall, just two blocks from Independence Hall. This marvelous institution reminds us through movies, images, and role-playing, that the Constitution does not sit on a shelf–it lives.

One thought on “Visit Philadelphia on the 4th of July”