My favorite place is Greece and now I’m revealing three places that are my travel secrets.

As Barbara Weibel at Hole in the Donut Travels says, Remember playing tag when you were a kid? Slapping someone on the back and yelling, “Tag, you’re it!” Well, I’ve just been been ‘virtually tagged.’

My friend and fellow travel blogger, Donna Hull, My Itchy Travel Feet was ‘tagged’ to participate in the meme known as My Three Best Kept Travel Secrets, and after telling us secrets about Tucson,  she tagged me.

In Barbara’s blog she explained (a meme, which rhymes with cream, is a catchphrase or concept that spreads rapidly from person to person via the Internet). This particular one was started by Katie of Tripbase.com So here goes. 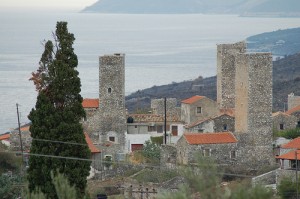 The Mani Peninsula. The Peloponnese Peninsula of Greece teems with variety. The ancient sites of Mycenae (where Agamemnon hung out), and Olympia (where you can run on the ancient track–but not in the ancient dress style, that being nude), beach towns, Kalamata olives, mountains and rushing streams–and the strangest bunch of domiciles I have ever seen. In the Mani, you will spot clusters of tower houses–square, one room atop another with no door on the ground level.  It looks like a medieval attempt to protect against another kingdom, but in fact it is 19th century attempts to protect against neighbors. 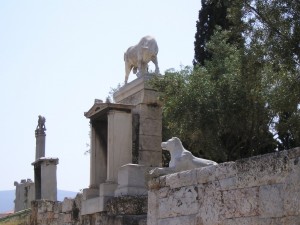 The Kerameikos Cemetery in Athens.  Starting in 1980, on-line friends suggested I go there, people who lived in Athens said it was one of their favorite sites, and still I hesitated. Not that I have anything against cemeteries, but there is SO MUCH to see in Athens.  Last year, on my fifth trip, I finally walked the short distance between my Syntagma area hotel, past the Monastraki metro station (you can take the metro from Syntagma to Monastraki if you’re a real wimp). Everything they said was true. For 1000 years Athenians were laid to rest here. The ancient  markers include some gorgeous carving. The small museum’s display about the mass graves during the plague brought me to tears. I could not believe my luck at being able to walk in the path of Plato. Okay, Matt Barrett–I finally went. And now I’m telling others and they are probably saying, “but there is SO MUCH to see in Athens.”

Crete’s Eastern Beaches. Quiz question of the day. Where is the only place in Europe you will find palm trees? Oh, yeah, you probably read the heading, didn’t you?  Well, it is true.  A beautiful  beach on the east coast of Crete makes like Miami with palm trees and soft sand.  Now you know I love Greece, but, folks, when you go to the islands for the beaches, you are barking up the wrong country–those beaches are mostly rocks and pebbles. Not at Vai. And when you think about it, the next stop south is Africa–across the Libyan Sea, so of course there are warm waters and palm trees.

Photo of Mani from a web site that identifies it as taken by cantaloupe99 at Flickr. The photo is no longer in that collection. Photo of Athens Cemetery by Vera Marie Badertscher, all rights reserved. Photo of Vai beach from tournet.gr–click on image to see more pictures and get more information on eastern Crete.

6 thoughts on “3 Best Kept Travel Secrets in Greece: Its a Meme”