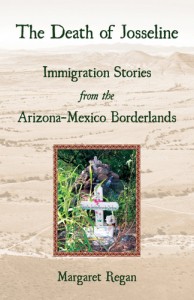 Book: The Death of Josseline: Immigration Stories from the Arizona-Mexico Borderlands (2010) by Margaret Regan

The border with Mexico along the southern edge of California, Arizona, New Mexico and Texas divides more than two countries.  It divides a poor country from a wealthy country. And in both countries, it divides politicians and voters, workers and social activists in their opinions about immigration.

The words you use quickly classify you into one camp or another—are the border crossers flooding from south to north “undocumented aliens,” “illegals,” or “immigrants?” Should we fence them out or help them create jobs? Should travelers be wary? As Phil Caputo said in a discussion at the Tucson Festival of Books, sometimes it is all right to be ambivalent.

A panel that was moderated by Tom Miller, included authors Caputo , David Danelo and Margaret Regan discussing their respective books about what Tom Miller calls “the third country.” I am fortunate to call Margaret Regan, author of The Death of Josseline

, a friend, and to have her agree to an interview for A Traveler’s Library. You can see the entire panel on booktv.org from C-SPAN.

A Traveler’s Library: Can you explain how you developed an interest in the immigration coming across the border?

Margaret Regan: Back in the year 2000…Arizona became THE crossing point for migrants from Mexico and Central America. In the mid-90s the federal government had decided to crack down on illegal immigration through the major urban crossings, thinking that if they stopped immigration in the cities, the landscape in between – in Arizona – was so forbidding that no one would cross here.[Instead] migration shifted, and by the late 90s and early 2000s the Border Patrol was arresting hundreds of thousands of migrants in the Tucson Sector.

I went to Douglas, Arizona, [for the Tucson Weekly]and found what looked like a war zone: Border Patrol vehicles bouncing up and down the roads, helicopters clattering overhead, migrants being arrested by the hundreds. Over several days, I did a ride-along with the Border Patrol, interviewed the mayor, talked with any migrants and …interviewed a Guatemalan man  whose 23-year-old cousin had died in his arms that afternoon in the desert.

ATL: Why should people be concerned about the fate of people who are trying to commit an illegal act  when there are so many law abiding citizens in our country that need our help?

M.R.: At a minimum, the deaths are a public health issue. The title story of my book recounts the death of Josseline, a 14-year-old girl from El Salvador who was trying to get to her mother in Los Angeles. Josseline sickened on a trail south of Arivaca, Arizona, and was left to die alone by her coyote, or smuggler.

In southern Arizona, we have an average of 200 migrant deaths every year in the deserts and mountains outside our cities. [Every year the number increases.] Over the last 10 years, 1,912 bodies have been found in the southern part of the state, and all parties to the debate agree that many more are never found.

These are deaths on American soil, of people whose labor has been welcomed by the American economy. Americans have passionately different views of illegal immigration, but surely we can agree that this annual harvest of bodies is unacceptable.

ATL: The economic situation in the U.S. has changed so much that it is less attractive for those seeking work.  Did you feel that change at all while you were researching the book?

M.R.: Yes. Douglas is a much sleepier town today than it was in 2000. Border Patrol arrest figures document the change: Tucson Sector arrests were running at about 600,000 in 2000, and by 2009, that number was 250,000. Fewer jobs mean fewer people crossing. But still some come because no matter how hard times are here, things are worse for impoverished people in Mexico and Central America. And families are still trying to re-unite.

ATL:Is the border area no longer safe for hikers, travelers and tourists from the U.S. and other countries?

Certainly drug smuggling is a concern, but the Border Patrol tells me their statistics show that 90 percent of those they pick up are … families looking to re-unite or people coming to look for work.

The drug violence so far has been confined primarily to northern Mexico. However, the Buenos Aires Wilderness Refuge, a beautiful birders’ paradise southwest of Tucson, has closed the section of the refuge adjoining the border, for safety reasons. The Tucson Audubon Society likewise ranks certain trails close to the border as too dangerous to travel. ..[but most of our] beautiful Arizona landscape and tourist attractions are open and ready to accommodate visitors.

ATL: Was there ever a time when you felt you were in danger as you reported this book?

M.R.: Ironically, I had the most trouble when I went out with the Border Patrol’s elite BORSTAR (search, trauma and rescue) unit on a very hot summer day. The team was hiking into the desert to rescue a Honduran woman they’d learned had suffered a potentially life-threatening injury, but they got lost and we wandered in the desert a long time. We found the woman eventually, but we were out so long that we ran out of water. It was a lesson in how treacherous the desert is, even for highly trained, well-equipped border agents.

Formerly a staff writer for the Tucson Weekly, Margaret Regan now freelances and regularly wins awards for her writing. She reviews arts  and has covered border issues and immigration for ten years.

Margaret, thank you so much for visiting A Traveler’s Library.

Readers, you may also want to read:

And please join the conversation about illegal border crossing in the Southwest. What should we do about the immigrants? About the deaths? Does this story make you afraid to travel to the southern border of the U.S.?

15 thoughts on “New Book About Immigration:Travel of a Desperate Sort”