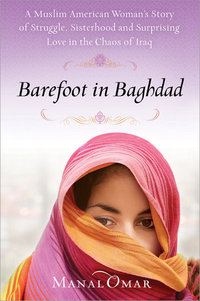 Destination: Baghdad, Iraq
Book: Barefoot in Baghdad: A Story of Identity – My Own and What It Means to Be a Woman in Chaos (NEW August 2010) by Manal M. Omar

(You may remember Wynne Brown’s review of Riding by Faith from Mexico to Canada Across America. Now she introduces another new book by another woman motivated by faith–but a different faith and a very different setting.)

isn’t your typical travel book — unless war zones happen to be your itinerary of choice.

But then Manal Omar isn’t your typical 28-year-old.

The title, she writes, comes from “a popular Iraqi-Turkmen proverb that says, ‘Walk barefoot and the thorns will hurt you.’ It is often used as a warning to those who challenge societal norms.”

Which is exactly what Omar does.

Born in Saudi Arabia to Palestinian parents, raised in the American South, she is a devout Muslim, fluent in both English and Arabic. She always knew she wanted to make a difference in the world, and, believing that her struggle to comprehend her own fractured background would her understand others in turmoil, she chose to work in international humanitarian aid in conflict zones.

Understandably, Omar’s parents were appalled when she wanted to leave a good job in Washington D.C. — for Iraq mere weeks after the U.S. invasion. And as a good Arab Muslim daughter, she could not go until she had both parents’ approval. She’d been offered the position of country director for Women for Women International, a nongovernmental organization (NGO) that helps impoverished female war survivors rebuild their lives by providing cash for basic food, water, and medications, in addition to job training, rights awareness workshops, and emotional support networks. Generally, the women are unmarried through death of a husband, divorce, or the choice to remain single, leaving them marginalized, stamped with a social stigma, and thus less appealing to employers.

After finally winning worried approval from her family, Omar left for the Middle East and remained there from 2003 to 2005, working with both U.S. authorities and Iraqi citizens.

She wasn’t new to Baghdad since she worked in that multicultural, flourishing city with the United Nations’ Oil-for-Food program in 1997 — but that was a very different time. She describes the transition:

The mosaic of identities inside Iraq was not hypocritical or schizophrenic: it was what made the country powerful.

Nevertheless, that mosaic was shattered by the eruption of violence that followed on the heels of the U.S. invasion. From weapons of mass destruction to suicide bombings, the lives of everyday Iraqis became inextricably linked to violence. The hopes and drams that Iraqis once dared to share evaporated in the smoke of car bombs. The diverse peoples who populated Iraq — Arabs, Kurds, Assyrians, Muslims, Christians, Sabaens — had once sipped tea at their doorsteps, but now they had disappeared from the streets. Women hid behind closed doors. The only images from within Iraq were betrayal and despair. Overnight, that brilliant diversity — Iraq’s own secret superpower — was forgotten, buried under the rubble left by bombs.

Ironically, considering that her job was to improve the lot of women, Omar’s first challenge was winning the confidence and friendship of the three Iraqi male staffers Yusuf, Mais, and Fadi, whose roles would be to keep her safe.

And to complicate things still further as the war and violence escalated, she grew attached to many of the Iraqis she met and worked with — including one man with whom mutual love could prove risky for both …

Despite the cumbersome subtitle, and although she writes “this is also my own story of struggling to understand my identity against the backdrop of a country in turmoil,” Omar spares us much self-examination. Instead, we watch her grow through her always fascinating and sometimes heartbreaking, humorous, and inspiring accounts of courageous Iraqi women of all ages. More than that, we gain a picture of Baghdad beyond the Green Zone and through the eyes of a bright, young, idealistic humanitarian.

Wynne Brown is a writer, editor, poet, and photographer based in southeast Arizona whose work has appeared in numerous books and in periodicals including Popular Science, Western Horseman, Arizona Highways, and many newspapers, as well as online venues such as DiscoveryHealth.com, DesertUSA.com, and EnvironmentalNewsNetwork.com. Brown is also the author of two award-winning books: More Than Petticoats: Remarkable Arizona Women and The Falcon Guide to Trail Riding Arizona. In her day job, she develops multi-media science materials for K-12 and undergraduate classrooms. (All done from Portal, Arizona, where a new mystery is set.)

Thanks for another sterling book review from my friend, Wynne Brown.

2 thoughts on “Baghdad in War Time”