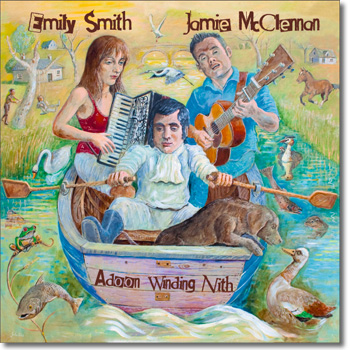 Today, as I settle in to my Paris apartment, Kerry Dexter brings us musical travel to Scotland with the Scottish National poet, Robert Burns.

Toasting the New Year with Auld Lang Syne: when the name of Robert Burns comes up, that might be what you first call to mind . A well known song indeed, and he wrote a few others you likely know, among them My Love is Like a Red Red Rose and Comin’ Through the Rye. When Emily Smith and Jamie McClennan started thinking about doing an album of Burns songs, though, they wanted to go beyond the expected.

They did that, in several ways in Adoon Winding Nith. Smith, award winning Scots Singer of the Year, and McClennan, who plays fiddle, guitar, and other instruments,  began building the album around songs connected with Dumfries and Galloway, an area in the southwest of Scotland which was the poet’s home for much of his life. It is also where Smith grew up, and in her own writing,  a landscape she often explores. The pair added several lesser known Burns songs, and a few well known ones, Smith says, “just because we like them!”

The result is a balanced and engaging program, which serves the Scottish national bard’s work well and showcases Smith’s and McClennan’s individual gifts and their creative work as a duo.

Smith and McClennan invite you in to the songs with singing and playing which, while staying true to spirit and tradition, make the music sound as fresh as though the songs were written yesterday. You have to think Robert Burns would approve.

Kerry Dexter suggested songs for Scotland last year, and she gives us music to accompany the Great American Road Trip each Wednesday over at Music Road. Thanks, Kerry. I love Robert Burns down to earth poetry, and I’m sure I’ll like the musical version as well.

What music do you listen to that reminds you of a country you’ve visited? Remember that your comments enter you in the Bella Italy Contest. And please share this interesting post with friends on Twitter or Facebook (handy buttons below).

6 thoughts on “Songs based on Robert Burns Poetry”