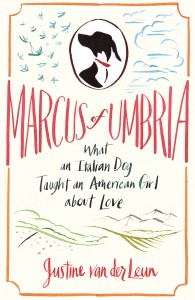 Book: NEW Marcus of Umbria: What an Italian Dog Taught an American Girl About Love by Justine van der

First, an admission: I rarely read travel memoirs by living writers.   I consult travel guides for help with trip itineraries  (more disclosure: I’ve written several). And I like travelogues by the long dead for the light they shed on the way perceptions of travel change — and remain the same.

But to me, reading a contemporary travel narrative is like taking a long trip with someone and never being able to get a word — or a change of itinerary — in edgewise, someone you wouldn’t necessarily want to hang out with in real life. As I am rarely tempted to harangue made-up characters, I prefer fiction with a strong sense of place.

So why, you may wonder — aside from the skills of an excellent publicist — did I agree to review Marcus of Umbria, a memoir by Justine van der Leun, who is very much alive?

Because Marcus is a dog and I’m interested in all things canine. I’m a particular sucker for stories about dogs and the women who love them.

Van der Luen is a terrific writer. Her prose is well crafted, smart and witty. About her life in Collelungo, the tiny town to which she impetuously flees to live with an Italian lover because she is restless in New York, van der Luen says:

I was unable or unwilling to do what society dictates an Umbrian woman should do — including incessantly cleaning up after a man, killing chickens with my bare hands, and cooking lasagna and wild boar.

But the narrator is young and gutsy and sometimes snarky about people I would probably like, thus setting off the whole would-I-want-to-hang-out-with-her reaction (she doubtless wouldn’t want to hang out with me). I grew impatient waiting for the promise of the book’s subtitle  — “What an Italian Dog Taught An American Girl about Love” — and of the Marcus-heavy first chapter to be fulfilled.

It’s not until about halfway through the book that Marcus begins to inhabit it in all her — yes, she’s female — neurotic, patrician glory.

And then I was happy to keep both Marcus and Justine company, to learn about the cultural differences between how dogs are regarded in small town Italy and in the U.S.:

Dogs, in [the townspeople’s] opinions, were to be chained up or caged. They were creatures, like sheep and cows, that served a purpose for human beings: Hunting partner, guard, truffle finder… .They were beasts.

The horses who share page space with Marcus fare no better in Collelungo than dogs do. Although the narrator excoriates herself for what happens to one of the two horses that she and her lover adopt, that doesn’t make reading about Calamity Jane’s fate any less disturbing.

In the end — and, if you look at the photo on the flap of the  jacket cover, you know I’m not giving anything away — Justine can’t be parted from Marcus, which is redemptive, both for her and for me as a reader. If ever a subgenre of travel literature by women with dogs emerges, Marcus of Umbria would rank as an almost classic example. All it needed was less guy, more canine. 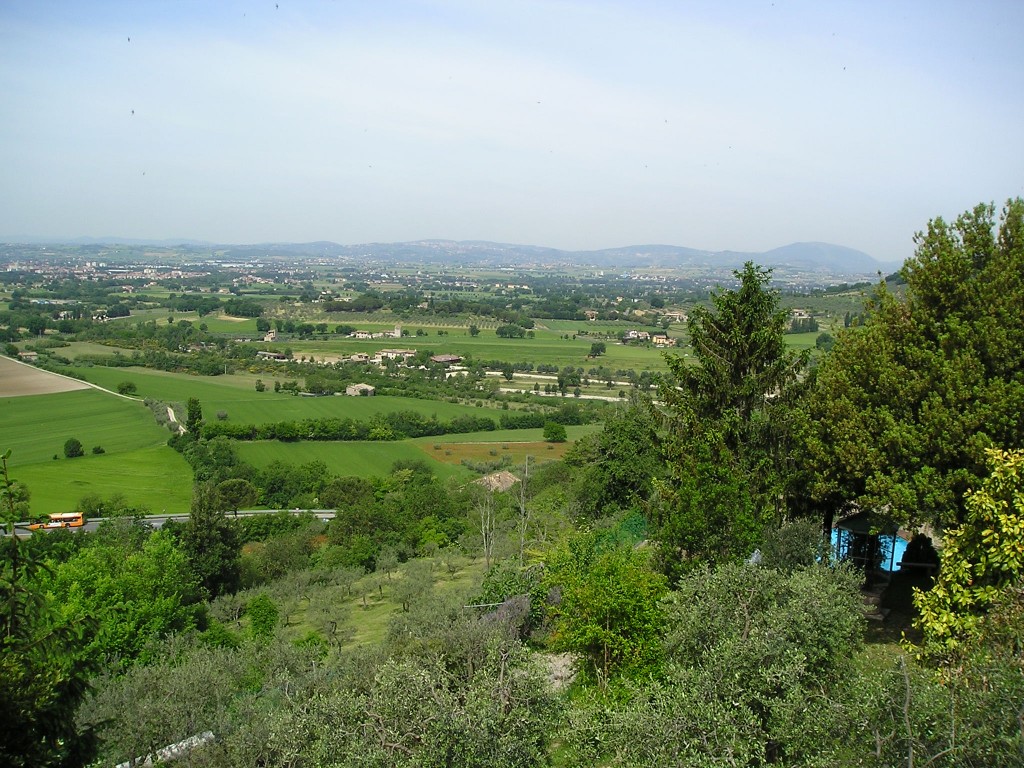 I am so delighted that my friend Edie finally found a dog-travel-book to write about for A Traveler’s Library. Thanks Edie! But tell, me Edie–did the book make Frankie want to hide even further under the chair than usual? I’m sure it did not inspire him to travel! At least not to Umbria. You would think that the home region of St. Francis might have developed some sensitivity to animals. But I hasten to add they are very nice to people! 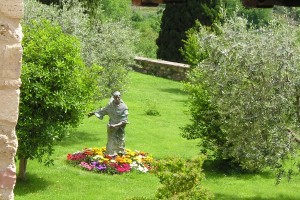 The book cover photo is from the publisher’s site, and the scenery of Umbria was taken by Vera Marie Badertscher, all rights reserved.

Readers: I have noticed that dogs and cats are treated very differently in different countries.  Do you have any observations from your travels that you would like to share with Edie and Frankie?

And please  spread the word that we are giving away a lot of Italian goodies at the end of this month to some lucky commenters.

16 thoughts on “Travel: A Romance for Dog Lovers”