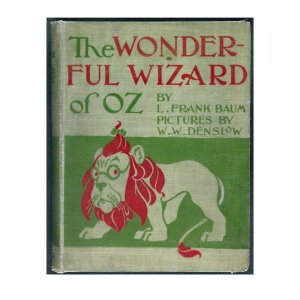 The Scarecrow listened carefully, and said, “I cannot understand why you should wish to leave this beautiful country and go back to the dry, gray place you call Kansas.”

“That is because you have no brains,” answered the girl. “No matter how dreary and gray our homes are, we people of flesh and blood would rather live there than in any other country, be it ever so beautiful. There is no place like home.”

Of course this conversation comes from L. Frank Baum’s classic, The Wonderful Wizard of Oz . And surely Dorothy is talking about Kansas, right? Not quite.

Ask any resident of Aberdeen, South Dakota, where Baum drew his inspiration for Dorothy’s Kansas and they’re likely to point to the flat, cornfield-dotted land that surrounds the town. And they have good reason to believe it was Aberdeen, not Kansas, which Baum had in mind when he wrote about cyclones sweeping whole homes away.

Baum lived with his family in Aberdeen for three years between 1888-1891. He went through two failed attempts at profitability there—first as the owner of “Baum’s Bazaar” and then as a writer and editor at The Aberdeen Saturday Pioneer (Baum moved on to Chicago when the newspaper folded). In 1900 Baum, along with illustrator W. W. Denslow, published The Wonderful Wizard of Oz. The story quickly became a bestseller.

The simple prose, silliness and surreal characters in The Wonderful Wizard of Oz surprised me. I’ve seen the technicolor Judy Garland version so many times that I thought reading the book would be dull. Yet much of the fun of the book and the dialogue are lost in the feature film (plus, Denslow’s winged monkeys aren’t nearly as scary as MGM’s, which gave me nightmares for months).

Walk the streets of Aberdeen and you get a sense that you might pass an Uncle Henry and an Aunt Em: The big draw in the morning is the dense, sugary apple fritters from Kessler’s grocery store (if you go past 9am don’t expect much of a selection!). The Twist Cone ice cream shop is the big nightly hangout in the summer. And the nearest “big” city, Pierre, the capital of the state, is just over 150 miles away. Aberdeen boasts almost 25,000 residents—keep in mind that Northern State University students figure in to that number.

Yet for a thorough suburbanite, I was drawn to the town of Aberdeen, as I suspect was Baum who grew up on the East Coast. The people are friendly; kids bike for miles without parents worrying; Little League game stands are packed with fans and fancy restaurants serve pizza.

Aberdeen has fully embraced their ties to Baum—the big draw for kids, both locals and visitors is Storybook Island. Open mid-April though mid-October, the kid-friendly park has mostly free play structures and a few inexpensive amusement rides (there’s even a small zoo). It’s the kind of place you sit back and talk with other parents, while your kids race from slide to swing.

Tucked in the northeastern corner of the state, Aberdeen isn’t likely to draw huge crowds of visitors, Rapid City, with Mount Rushmore, is the far more popular South Dakota destination. Yet, there’s something charming about visiting the would-be Kansas and at some point in your travels clicking your heels and saying, “There’s no place like home.”

And read Baum’s story with your kids and you’ll discover those heels were not ruby red, but silver.

Kristen J. Gough blogs about adventures in food at MyKidsEatSquid.com. Along with her three girls she has visited several parts of South Dakota, with her husband, who was raised in the state.

My thanks to Kristen, who also wrote our Road Trip entry for Michigan, for a most interesting view of South Dakota. Have to fess up that all I know, and about all I’ve seen is Mt. Rushmore, so it is nice to have another attraction and some little known info about the Wizard of Oz.

All pictures here (except the book cover) are the property of Kristen J. Gough. She hopes you like them, but if you want to use them, you need to ask her first.

Remember to check out Music Road, where Kerry Dexter last week suggested music for both the Dakotas.  What would we do without Kerry’s sound track for the Great American Road Trip??