The Secret of Kells – Magical, Mystical and Marvelous

The Secret of Kells

was nominated for an Oscar for best animated picture this year, and it’s easy to see why. As big-budget, CG-animated films crowd the theaters, along comes a movie like this gem, which reminds us that hand-drawn animation can be very beautiful. It also holds a place in cinematic history for being the first Irish animated film.

(Ed. Note: For those who are not familiar with the Book of Kells, it is one of the oldest extant illustrated manuscripts, dating from the 9th century. It can be viewed in Dublin, Ireland.)

The story begins in a remote medieval outpost of Ireland, where young Brendan (voiced by Evan McGuire) lives with his uncle Abbott Cellach (Brendan Gleeson), a monk who runs the Abbey of Kells. Abbott is focused on defending Kells from the looming threat of a Viking invasion, and he expects his brothers and nephew to take part.

But when a master illuminator named Brother Aidan (Mick Lally) arrives in Kells with an unfinished manuscript full of secret wisdom and powers, Brendan disobeys his uncle to help Brother Aidan find the right ingredients for ink, and soon discovers that he himself has a talent for illumination. 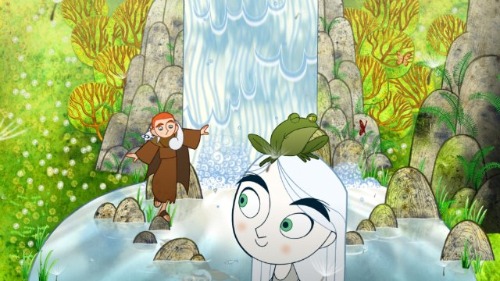 Brendan ventures into an enchanted forest, and with the help of a beautiful wolf-girl/fairy named Aisling (Christen Mooney), he faces an ancient serpent god to find a special crystal needed to finish the book.

The Secret of Kells is a story of light and dark, good and evil, and artistic vision that brings the Book of Kells lore to both children and adults. The animation has a magical, other-worldly quality that mirrors Celtic folk art, making the film not only an interesting story, but also a lesson in art history.

I spoke recently with ‘Kells’ director Tomm Moore, who said the film didn’t start out that way. “If you look at the galleries on the DVD, you can see it was a bit more Disney inspired, less true to the art of the time,” he said, adding that he’s a big fan of Chuck Jones and early Disney films like Bambi and Pinocchio.

But we went further and further into developing something that looked totally different from any other animation that was being done. And during the period that we were developing the project, computer animation came on the scene with really strong, realistic stuff. So, it really pushed us to go even more graphic and more inspired by medieval art and folk art to try and do something different.”

I mentioned that Aisling’s song, sung by Christen Mooney (who also voiced the part), is one of the most haunting and beautiful songs I’ve ever heard in a children’s film, and was surprised to learn the story behind it.

“When she first came in, we thought she was too young,” said Moore. “She was eight, but she looked about five or six. But her performance was just amazing. It was just that kind of magic thing whenever somebody absolutely fits a role.”

He added that her mother encouraged the filmmakers to explore the idea of using Christen’s sister for the musical scenes. “But I thought there was something really endearing about her voice, because it wasn’t really strong and polished,” said Moore. “It was really like a little girl singing.”

The Secret of Kells, released on DVD and Blu-ray Oct. 5, 2010, is not rated in the U.S., but carries a PG rating in other countries. Some of the images might be frightening for kids younger than eight, but it’s also a lovely story about Irish lore, illuminated manuscripts, and the power of faith and imagination to carry us through the dark times.

Read my full interview with Tomm Moore at Film Gecko, and check out The Secret of Kells when you have a chance. Also look for his upcoming film Song of the Sea.

Jane Boursaw is a family entertainment writer specializing in movies, TV and celebrities. Visit her at Film Gecko, and Reel Life With Jane. Follow her on Twitter; become a friend on Facebook; email jboursaw@charter.net

I am so delighted to have Jane do a guest post on this great film to add to the traveler’s library for a taste of Irish culture. Jane is our go-to gal for information on movies and Hollywood madness.  Not only that, but she is my blogging guru as well. Nearly two years ago, when A Traveler’s Library was just an infant, I took an on-line class from Jane. Contact her if you need a little help with blogging. THANKS, Jane. You’re the greatest. Photo credit for cartoons: Cartoon Saloon.

YOUR TURN: Do you enjoy animated films?  I tend to put them last on my wish list, but this one is certainly sounding intriguing!! I would like to hear other people’s opinions about animated films.

10 thoughts on “Mystical Ireland on Film”