I had not read the hard boiled detective stories for quite a while, and I had forgotten what fun Raymond Chandler can be.  I had also forgotten how openly racist and sexist was the society that he wrote about.

Some people will take offense at the terms his characters use and the assumptions they make about–for example–African Americans, American Indians, Japanese gardeners and blond millionairesses.

Although most people still accept those sexist descriptions of blonds– “Dames lie about anything. Just for practice,” says an L.A. cop– the other prejudices are out of bounds these days.

If the language upsets you, read about P.I. Philip Marlowe’s adventures in a bowdlerized edition–there are plenty–instead of the Library of America edition that I read. Me, I take this novel as an anthropology lesson.  It reflects the way a certain class of people in L.A. thought and talked in 1939.

Interestingly, detective Philip Marlowe talks in standard English and seems to know his way around classic literature.  If he had not wound up as a tough private eye–a shamus–a dick–he would fit nicely behind a podium at a small liberal arts college.

I am drawn to Chandler more by the language than the twisty plots.  There are plenty of 72-year-old slang words that I don’t understand, but Marlowe/Chandler’s quips keep me laughing.

Chandler excels at drawing word portraits. Here’s part of his first page description of a key character in Farewell My Lovely, Moose Malloy, who “..looked about as inconspicious as a tarantula on a piece of angel food.”

(Chandler likes to use negative metaphors. Later in the story he describes a house as not very impressive. No bigger than Buckingham Palace and with fewer windows than the Chrysler Building. For more about his use of metaphors, and a plot summary of Farewell My Lovely, see this article by one of Chandler’s biographers.)

He goes on about Moose Malloy:

“He was a big man, but not more than six feet five inches tall and not wider than a beer truck…” “His skin was pale and he needed a shave.  He would always need a shave.  He had curly black hair and heavy eyebrows that almost met over his thick nose. His ears were small and neat for a man of that size and his eyes had a shine close to tears that gray eyes often seem to have.”

Not only has Chandler presented a case study in how to write a description, he has accomplished a secondary aim by letting us see how observant Phillip Marlowe is.  Neither Chandler nor Marlowe miss a trick.  And this is just the first page.

Once you have read Chandler, you will have a sense of deja vu when you take a road trip to Los Angeles. Not the freeways, but the streets and neighborhoods beneath and around the network of high speed. Piling up details of place, Chandler’s usually clipped sentences become an urban sprawl leading us into the heart of the city and its suburbs. You’ll have to read those for yourself, because one paragraph would use up this entire post.

Here are a few more choice bits I marked with my Book Darts (a discovery my books, my library and I are most grateful for. And they are not paying me to say that):

She fell softly across my lap and I bent down over her face and began to browse on it.

A couple of frayed lamps with once gaudy shades that were now as gray as superannuated streetwalkers.

And in a very different house:

It was the kind of a room where people sit with their feet in their lap and sip absinthe through lumps of sugar and talk with high affected voices and sometimes just squeak. 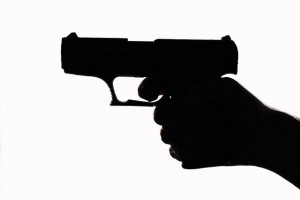 Marlowe’s erudition shows when he gets a call from a potential client and the detective asks if the job is honest:

The voice grew icicles. “I should not have called you, if it were not.'” [On hearing that, Marlowe thinks] Harvard boy. Nice use of the subjunctive mood. The end of my foot itched but my bank account was still trying to crawl under a duck.

Take heart, baby boomers, although Chandler wrote for a living most of his life, and cranked out dozens and dozens of pulp magazine mysteries, Farewell My Lovely was his first novel and he was 50 years old when it was published.

Hollywood liked Chandler, who along with Dashiell Hammett fueled the film noir explosion in the 40s and 50s.  I watched the remake of Farewell My Lovely (1974)starring Robert Mitchum with a brief appearance by a young studly Sylvester Stallone. I’m here to warn you. Don’t bother. Mitchum should have been right for the role, but the script is so bad that he can’t escape sinking with the rest. The credits and the background music are attractive and it’s downhill from there on, mostly because the movie dropped not just scenes, but key intentions and key characters from Chandler’s novel.

Just one example. A phony psychic in the film (male) becomes a tough dyke Madame in the film–probably to give the film makers a chance to have a lot of full frontal nudity parading around. And although they don’t shy away form using “shine” and the more offensive “n” word to refer to blacks, the movie changes the hilarious Hollywood Indian character of the novel into…a cowboy. Huh?? And Marlowe doesn’t even figure out the crime. Sorry, that’s three examples, but I could talk forever about how bad this movie is. So I’d better move on and go look for a copy of the 1944 version starring Dick Powell and called Murder My Sweet. Synopses seem to indicate it sticks closer to the novel.

Trivia: William Faulkner adapted Chandler’s The Big Sleep for the screen, and allegedly didn’t understand the novel. It was saved by Humphrey Bogart and Lauren Bacall.

I wish I were in L.A. April 23. I’d take the Esotouric Tour of Raymond Chandler’s L.A. I keep getting the company emails and they have a brilliant collection of off beat bus tours. (And they are not paying me to say that. Darn!)

By the way, Roger Ebert really, really liked the Mitchum movie, as did the general run of the mill reviewers at Rotten Tomatoes.  I have the feeling none of them had read Chandler.

And I should mention that Kerry Dexter of Music Road, my faithful companion on this road trip has popped a CD of a singer with bluegrass roots— who uses a bit of jazz and Celtic music as well–into the player. I’m sure its nice, but I’ll be ejecting it when Kerry stops for a burger. I’d prefer Cool Jazz for my Noir mood L.A.

Have detective novels and film noir shaped your view of L.A.? Have you seen or read Farewell My Lovely?