Books for The Arab World in Troubled Times

Note from 2011, the Arab Spring: With war and revolution burning throughout the Mid East, I am continuing a series on countries we need to know more about. Last week was Traveller’s History of Egypt. This week, coincidental with news of Syrian rebellion , we move to Syria. As an apology for this longer-than-usual post, (Contest long over)

The Calligrapher’s Secret reads somewhat like a Dickens’ novel would if Dickens were forced to live in, say Russia, and was homesick for London. Rafik Schami‘s Dickensian tendency to load the book with minor characters and tell the backstory of every walk-on makes the book slow going at times.

Schami, a Syrian, has lived in Germany for 35 years, and writes in German about subjects from his homeland.  Therefore the American version is a translation (by Anthea Bell, who also translated his 2009 American issue of  The Dark Side of Love

I always have difficulty figuring out whether characteristics of a novel that has been translated are due to the author or the translator, but since Schami’s books sell like sausage sandwiches in Germany, I have to assume that the sometimes flat prose in this book is due to translation.

The plot of The Calligrapher’s Secret is complex, but in a nutshell involves a coldly intellectual calligrapher who is determined to reform the Arabic system of writing.  His wife finds love elsewhere and runs away with his jug-eared assistant. Conservative forces who disapprove of any changes in the traditional scripts (similar to the kerfuffle over studying the Koran in another book for travelers) set up the calligrapher and he comes to a bad end. (I’m trying to avoid spoilers, you see.)

I have always loved the look of Arabic writing but did not realize its deep importance in the culture. The battle over the shapes of letters could represent the entire struggle between modern ways and religious conservatives that drives so much conflict in the Arab countries. Since the book takes place in the fifties and sixties, we learn some interesting history of Syria before a dictatorship replaced a once-democratic government.

The structure of The Calligrapher’s Secret made me feel like I was in the midst of one of the decorative calligraphic pages that the author frequently refers to, where the writing is so ornamental and so convoluted that it is difficult to see the actual meaning.

“The internal music of calligraphy works on the brain and then opens up the way to the heart–like music when you don’t know its origin or what it is about, but you enjoy it all the same.”

Like calligraphy, the story circles and twists gracefully, if not always with obvious logic.

Factions are given familiar names. The Minister of Culture encourages the calligraphers effort, but:

“Even here…he should speak softly because the place was full of members of the Muslim Brotherhood.  Most of them were harmless, added the minister, but some among them formed secret underground societies call themselves by such names as the Pure Ones, or Those of the World Beyond, fanatics who would not shrink from murder.”

The author never seems to get inside the head of the Muslim religious fanatics. Rather, the main character are either Christian or non-believers. Hamid, the calligrapher, he says,

“…underestimated the fanatics.  He himself was not a religious man.  …and he was proud to the farthest corner of his soul that God felt such a particular liking for Arabic that he had dictated the Quran in that language to his Prophet Muhammad…However he respected Jews more than Christians, because he saw many parallels between Judaism and Islam, while Christians arrogantly insisted on holding to their belief that God had fathered a son who drank wine and got himself crucified. And in addition the man Jesus requried his followers to love their enemies!” 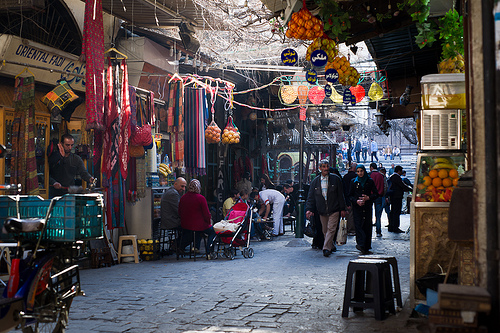 The book  comes down hard on the government and the religious fanatics in Syria, but nevertheless the author deeply loves Damascus. He paints the neighborhoods and describes the tribal loyalties and customs in such a way that the reader feels they have been already traveled to Damascus.

I have long thought that I would like to travel to Syria. Now, of course, is not the optimal time to go to any Arab country, but if you are marooned while dreaming of exotic lands, this book, despite its sometimes frustrating diversionary tactics, will take you away to Damascus. Meanwhile, it may also broaden your understanding of the conflicts in the Middle East within countries like Syria.

Where would we be without Flickr? I strongly urge you to click on these beautiful photos to see more about the photos and the photographers. Interlink Books gave me this book for review. You can buy the book at Interlink Books, unless you would like to earn a few cents for A Traveler’s Library, by going to Amazon through any one of our links.

Is Syria a country on your wishlist? Were you aware of the importance of calligraphy in Arab countries? Are you looking for books to help you understand the Arab world?

9 thoughts on “Syria Stars in New Book about Calligraphy”