Note: Please mosey on over to Mara Purl site and see her big rave about A Traveler’s Library. Thanks Mara!! 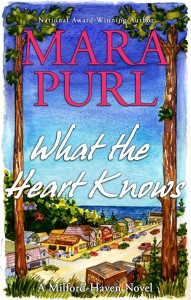 I am reading What the Heart Knows in a pdf copy that was supplied to reviewers by the publisher. It is a combination mystery/romance/contemporary novel set in California, and a delightful read. Fascinated with the author’s background (as a writer, actor on Days of Our Lives soap opera, and a musician), I decided to ask her a few questions. Sorry, this is a very long post. I reluctantly cut quite a bit, but Mara Purl loves words and has interesting stories to tell!

A Traveler’s Library: In What the Heart Knows, you write about several real locations and one fictional town on the California coast. What led to locate your story on the central California coast? And why did you borrow a Welsh name for the town?

Mara Purl: To begin by answering the last question first, I discovered, rather than created the connection. “Cambria” was the ancient Roman name for Wales. I have a dear friend…who grew up in a tiny California town called Cambria…It sounded like a dream and I kept wondering when and how I’d ever find the time to get there. I was in LA working as a freelance writer but mostly focusing on the acting chapter of my career, I fell in love with the play “Sea Marks” by Gardner McKay. It’s…about a woman from Wales and man from Ireland…I began to look for a way to produce or co-produce it. I found a theatre, but the co-star I found wasn’t free when the theatre was; there were various other stumbling blocks. I let it go . . .My manager, who did not know about my interest in this play, called one day… When the title was half out of his mouth, I shouted “I’ll do it!” “But,” he remarked, “you haven’t even heard where the production will be done or who the co-star is!” I didn’t care. I’d have done anything to do that play.

As it turned out, the play would be done in a small town called Cambria right in the middle of the California coast, halfway between L.A. (my home) and San Francisco. So I finally got my first trip to Cambria…I had a strange series of deja-vu moments during that first weekend of rehearsal. And during the long summer’s run of the play, I found myself intrigued by Life In A Small Town.

I’d grown up in Tokyo; then moved to New York; then to Los Angeles. What did I know about a small town? Virtually nothing. I read the local paper, befriended folks who came backstage after the show, and eavesdropped in local eateries. Since I look at life through the lens of story, I placed my magnifier upon the tapestry of Cambria.

[She produced A Christmas Carol for a Cambria radio station and they liked it and told her she could come back any time.] [Meanwhile]…I’d been hired as a regular actor on the soap opera “Days Of Our Lives.” This was my first brush with what I call the long form of story-telling, where choices and consequences play out for weeks at a time… I hadn’t taken the form seriously until then, but now I became intrigued with it. [She decided to write a serial play based in a small town like Cambria for the radio station in Cambria.] … Researching Cambria, I discovered the connection to Wales, and found on the map of Wales, on its western coast, a town called Milford Haven that seemed to ring a bell. Then, in a moment of synergy that I experienced as both instant intuition and certain direction, I happened to audition for Shakespeare’s “Cymbelline.” Speaking the lines of the protagonist Imogen, I found myself reading a letter from her beloved that said, “Meet me in Cambria, in Milford Haven.” I just knew that was the name for my fictitious town, and for my show. [The radio serial based in Cambria was a big hit in Cambria, so she produced it several other cities, including in England on the BBC, where it was also a striking success.]

ATL: Is it easier in a novel to describe a real place or a fictional place?

MP: Good question! On the face of things, it may seem easier to describe a real place. After all, you can go sit at the very table in the very café in the very city . . . and track each and every detail before your eyes… However, as a story begins to progress, if you’re using a real place, you’re then also “stuck” with its real details. You can’t say it’s 80 degrees if it’s really 110 in the shade; you can’t say the population is 100,000 if it’s really 10,000; you can’t turn right on Parchment Street if it’s a one-way boulevard.

And it continues to get more and more and more complicated as you try to blend your fictional characters with a real place. You can to some extent fictionalize a real place if you use is a kind of stationery tableau that holds steady behind your moving characters. Dan Brown does this in The Davinci Code with Rome; Rex Pickett did the same with California central wine country his novel Sideways. .. But if your place is more intimate, and if it’s to be as much a character as your people, living and moving and breathing and evolving, it really has to be a fictional place, or a heavily fictionalized place (such as when Santa Barbara becomes Santa Theresa in  Sue Grafton ’s books) so as to be flexible enough to be true. Don’t you love it! Something must be fictional in order to be true!

ATL: This is the first in a series. Will the action in all the subsequent books stay in Milford-Haven?

MP: Yes . . . and no. Each novel does take place in Milford-Haven, and we will come to know the town and its people better and better… However, my protagonist Miranda Jones goes someplace different in each novel. She stays put in book one, What the Heart Knows, because this anchors both her and the series. But in book two, Where the Heart Lives,she goes a little farther afield—to Santa Barbara and to Los Angeles. Then in book three she goes to Oregon; and in book four she has a truly grand adventure in Alaska. In future books she’ll travel to Milford-Haven, Virginia, and even to Milford Haven, Wales, by the way, so travel is a theme for Miranda, just as it is for me.

MP: My favorite destination is the Central Coast [of California]. It’s my soul’s home, and always always speaks to me. I have the curious sensation both of arriving home, and of journeying into an adventure. There’s both a comfort and a charge every time I point my car toward the Central Coast, or even when I fly over it. If the Central Coast is a magnet for me, then all my innards like up like iron filings and form a perfect pattern of joy the closer I get to this particular region.

My second-favorite destinations are those that resonate with the California Central Coast, and I’ve found several: Milford Haven, Wales touches me profoundly; parts of the Japanese coastline draw me; parts of the various Hawaiian coastlines inspire me very much. One I haven’t visited yet that’s been on my list for years is the Milford Sound in New Zealand.

ATL: Any favorite books or movies that have inspired you to travel somewhere? MP: I’d say Louis L’Amour’s books inspired me to travel in Colorado and New Mexico. Louis, whom I met while writing a screenplay with a writer-director who’d directed one of Louis’ films, became a great friend and mentor. He  had such a well-developed sense of place that the Old West comes alive through his pages.

ATL: Thanks so much, Mara. I urge readers to take a look at your web site and learn more about your many talents, and particularly more about your books set in Cambria. Although I’ve been through Cambria, I’ve never stayed for long. You’ve made me rethink that!