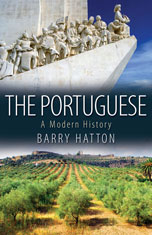 Book: The Portuguese: A Modern History by Barry Hatton (NEW 2011)

Planning a trip to Portugal? Or wondering why you should go to Portugal? If you want to read a book that will enhance the trip you are planning, you could read a historical mystery novel (review to come) or you could read The Portuguese, which is a novelistic history.

If you think that history books are too dry and boring to hold your interest, you have not read Barry Hatton’s The Portuguese: A Modern History.  While he does go back as far as the Age of Discovery, the bygone age when Portugal spread its empire around the globe, most of the book focuses on history closer to our own time–and indeed Portugal–a shrunken Portugal– today.

Throughout the book, Hatton is most interested in exploring what makes the Portuguese the way they are. How did a world power sink from view on the world stage? Why do they currently occupy a very low rung on the Eruopean economic ladder?

And when is the last time you read a history book that provides a travel guide for high points to visit?  About the size of the state of Indiana, (350 miles by 130 miles–561 by 218 kilometers) it contains enough charming landscape to keep tourists busy for weeks. Even those tourists who think they are visiting just another province of Spain–since many foreigners’ get confused about where and what it is. Hatton’s descriptions made me scribble a list–

Hatton, who has lived in Portugal as a correspondent for more than twenty-five years, is married to a Portuguese woman.  He talks about food and music because he believes they are a key to understanding the Portuguese psyche.

They have a collective angst, which is expressed in the sad fado (pronounced fardo) music of their country. Portugal is summed up by the nearly untranslatable word “saudide” which kind of means a sweet sadness–a desire for something unattainable, but hoped for nonetheless.  The people accept their fate, Hatton says, with a peaceful shrug and a sardonic comment rather than taking to the streets and demanding change like Greece, which in many ways is similar to Portugal.

“The Portuguese feel that destiny has dealt them a poor hand and they shake their fist at their lot in life, but they do not as a rule express this indignation in a constructive way. ” Instead, Hatton says, “sidestepping the law offers the thrill of successful transgression.” He calls it “a tame insurrection.”

Even in the revolution that overthrew the 30-year dictatorship of Antonio Salazar, the soldiers sported carnations in their guns, demonstrating their unwillingness to fire on anyone. But the 1974 coup was quick and complete, and the growing pains of democracy followed, until they joined the European Union in 1986 and went on a growth and spending spree, largely at the cost to other countries in the EU. This tendency, and the cheerfulness of the people (despite that saudide), the focus on family and church before country, the clinging an ancient and glorious past, all reminded me of Greece.  In many ways Portugal seems to have a Mediterranean nature, even though it is actually an Atlantic Ocean country.

I first dipped into this book to see what light it would shed on [amazon_link id=”0425184234″ target=”_blank” ]A Small Death in Lisbon[/amazon_link], the mystery novel I mentioned in the first paragraph. This history was very helpful in orienting me as to the 1940’s-90’s , but it also seduced me with its descriptions of a beautiful and historic country that would be well worth visiting in the 21st century.Unfortunately, the index is skimpy and makes going back to look up a bit of information very difficult, but that is a small complaint in this light-hearted, entertaining history of Portugal.

Thanks to Interlink Books who provided a review copy of the book. You can order directly from Interlink by clicking on the book cover. Or, you can order from Amazon if you are going there from  the link to A Small Death in Lisbon. I earn a few cents from any purchases made at Amazon when you use my links. Pictures are from Flickr with Creative Commons license. I encourage you to click on the picture and learn more about each photographer.