As October brings a crisp edge to the air and leaves start to take on their autumn colors, music fills the air even more than it usually does across the island of Cape Breton, in Nova Scotia. It’s time for the Celtic Colours International Festival.

Cape Breton, a small island in the far north of Atlantic Canada, has nurtured its own style of music over the centuries, fueled equally by immigration and isolation, by warmth of community and by the astringent life required to make a living from sea, forest, and mine. Many of those who found their way to Cape Breton came from Scotland, and Scotland has remained the strongest presence  as Cape Breton created its own piano, fiddle, and pipe based music  Every year in October, Capers invite the world to share this music on its home ground. Communities across the island host concerts, in venues which range from small community halls, schools, churches, and historic buildings to large performance spaces. Each year they invite musicians from the Celtic traditions of Scotland, Ireland, and the United States as well to join in.

This year, the festival takes place from 7 through 15 October. Musicians who have taken Cape Breton music around the world will be there, among them Mary Jane Lamond, Ashley MacIsaac, and Kimberley Fraser. There will be local and regional favorites as well.

From Ireland, international stars Mary Black  and Niamh Ni Charra will be on hand, Bruce Molsky  and Michael Doucet will come from the US, and Karine Polwart, Emily Smith, and Kathleen MacInnes will be among the artists from Scotland.

The concerts are designed to create and explore connections in the music, with each event (there are several to choose from across the island each evening) hosting three or four artists or groups. Each plays a set on their own, and then all join together at the end of the evening, always a creative and lively experience for musicians and listeners alike.

The warm and welcoming presence of  Cape Breton is found in the music, and in related events which go on during the festival time, including community meals, talks, art exhibits, jam sessions, and the always popular festival club, where people gather just as the scheduled events for the evening are winding down. This takes place at the Gaelic College at Saint Ann’s in the center of the island. Music and craic (good conversation) at the festival club often are still going strong as the sun rises. Baddeck, which A Traveler’s Library visited earlier this year, is also a crossroads for festival goers. You’ll find music and community events going on across the island, from Judique to L’Ardoise to Louisbourg  to Mabou to Sydney to Whycocomagh. (See map here)

There’s nothing quite like being on Cape Breton for Celtic Colours, but there are many fine recordings of the music of Cape Breton. Two of them:
Blueprint  from Natalie MacMaster, finds the top class fiddle player offering a mix of contemporary tunes, traditional ones, and a dash of country influence now and again, reels, jigs, and waltzes along with a lovely slow air, called My Love, Cape Breton, and Me, a song which was sung at her wedding.

Kimberley Fraser plays the fiddle as well, and she’s also a step dancer and plays piano. That triple threat skill at three things which get to the heart of Cape Breton music make her an inspired teacher of the music, and a gifted ambassador for it as well. Her love for all this comes through in her playing  on both sparkling reels and jigs and graceful slower pieces she’s recorded on her album Falling on New Ground. 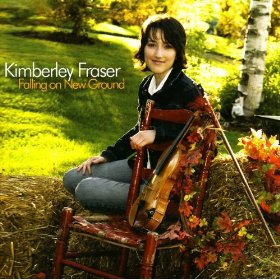 Original, creative, based in the fiddle traditions of the island and taking those forward a few more steps. each of these albums will make a fine introduction to the music of Cape Breton, and a great refresher course as well.

As a policy of A Traveler’s Library, we tell you about affiliate links. The links included here may make it possible for you to listen to excerpts of the music, and the ones to Amazon in this post are affiliate links. If you buy anything through the affiliate links in this post, you will be supporting the site Music Road. Thank you. The scenic photo of Baddeck is the property of Vera Marie Badertscher.

Have you ever made your travel plans to coincide with a music festival? Where in the world were you going?

10 thoughts on “The Colours of Music on Cape Breton”