Book: My Lady Judge: A Mystery of Medieval Ireland by Cora Harrison (2007)

The Burren of Ireland fascinated me when we traveled through County Clare. Long, flat tables of gray stone stretch toward the sea. Cracks and ridges and deep fissures make walking across the limestone ground an adventure. Lovely little wild flowers poked up out of this seemingly hostile environment, adding to the oddness. It all looks very ancient, even before you come upon the frequent Ring Forts and Dolmens left behind by prehistoric settlers.  The spooky, otherworldly atmosphere of the Burren makes it a perfect locale for a mystery, and how appropriate that Cora Harrison has set her Burren mysteries in the 16th Century.

has been followed by five more Burren mysteries from this prolific writer, who has also turned out a mystery series set in London, and various other books, including young adult novels. Someone recommended these Irish mysteries to me some time ago, probably Kerry Dexter, who keeps me up to speed on all things Celtic–and I can certainly see the attraction for a lover of Ireland.

The author based the lady judge of the title on a real woman judge of that period, and the cases discussed are detailed in records copied out in the mid sixteenth century at the very real law school of Cahermacnaughten, the setting for the book. Without the author’s acknowledgement to those ancient scholars and the snippet from their work that heads each chapter, I certainly would have thought that she had a great imagination.  Women judges in medieval times? Actually Mara was called a Brehon, and her responsibilities were much broader than a judge today.  She not only judged cases, but also investigated them. And she ran a law school where children (all boys in this case) from  six to twenty years old lived and studied the law.

Laws that set fines according to the value of the person wronged? In other words, it is more egregious to kill a king than a common peasant. And the lessening of penalty for anyone who confesses? All of these things are laid out in the book.

In the rural areas of the Burren life centers around the Catholic churches, but ancient Celtic rituals die hard, and when the people gather for a bonfire on top of a mountain in celebration of May Day, one of the older law students is “secretly murdered.”  Mara uses a combination of Sherlock Holmes type logic, gathering of physical evidence and psychology to discover the killer and bring justice. 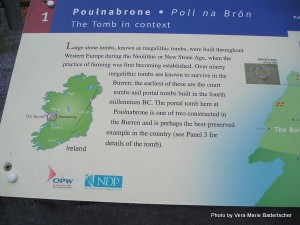 The regular assembly of court happens outdoors around the Poulnabrone dolman. I perked up when I read that name, because when Ken and I went to Ireland and drove through the Burrens, we made a special effort to go to Poulnabrone. It is an impressive and mysterious assemblage of enormous rock slabs.  And I can understand how such a place would lend the proper solemnity to the proceedings of the court in the Middle Ages.

This is not a mystery to read if you are looking for blood-soaked action and breathless chases–although Mara does have a few hairy moments which both take place in caves. It is rather, a study in history and psychology–a gentle, scholarly tale reflecting the lady judge herself.  Reading it, we learn not only about the legal system of Ireland in the Middle Ages, frequently compared unfavorably to the savagery of the British, but also we meet an assembly of fascinating individuals. They range from the sour village priest to the King who is smitten with Mara– providing a bit of gentle romance.

This (and I’m sure all the other books of the series) are a perfect addition to the Traveler’s Library–particularly if you are going to visit the moody and compelling Burren of Ireland.

When you visit the Burren, besides stopping at Poulnabrone, you might want to include in your travel plans, a visit to the Craggaunowen Project. There we saw a 15th century castle, and a recreation of an earlier Iron Age settlement (5-12th century), as well as the boat of St. Brendan who supposedly discovered America before Columbus. The Craggaunowen Project is hidden away in a rural area and does not have its own web page. Nevertheless, as a living history site it was one of the most fascinating we ever visited.

All the photographs here are the property of Vera Marie Badertscher. All rights reserved. The link from My Lady Judge allows you to go directly to Amazon. If you buy anything there, even though it costs the same A Traveler’s Library will earn a few cents. Thank you.

Have you been to the Burren? Tell us what you saw there.

9 thoughts on “Mystery in the Spooky Burren of Ireland”