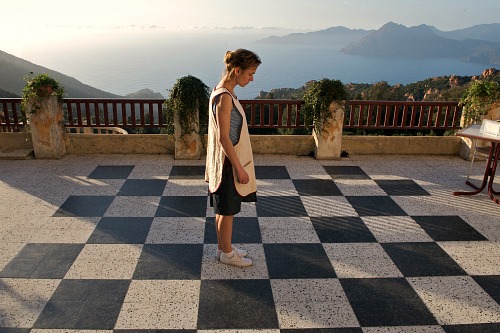 I knew right away I’d like Queen to Play, a French film set on the gorgeous island of Corsica. You geography buffs will know immediately where that is, but I had to look it up. Corsica is a mountainous piece of land in the Mediterranean Sea, located west of Italy, southeast of the French mainland, and north of the island of Sardinia. There’s a natural park on Corsica which includes the Scandola Nature Reserve, home to two endangered species, the mouflon and the Corsican red deer.

But you won’t see those animals in Queen to Play, because the film’s focal point is a chess board. Adapted from the novel The Chess Player by Bertina Henrichs and written and directed by Caroline Bottaro, the story revolves around working-class chambermaid Helene (Sandrine Bonnaire, whose union with William Hurt produced a daughter, born in 1994). Helene spends her days cleaning rooms at an upscale resort frequented by tourists.

One day while cleaning a room at the resort, Helene glimpses an American couple (Jennifer Beals and Dominic Gould) playing chess on their balcony. Something is clearly missing in Helene’s marriage to construction worker Ange (Francis Renaud), because she finds herself drawn to the couple’s romantic interplay as they play the game. You wouldn’t think of chess as a sexy game, but this couple makes it seem that way. What’s more, they’re having fun, which I’m guessing is sorely lacking in Helene’s life

So she not only sets about learning how to play chess, but she becomes completely obsessed with it. When she sees a chess game collecting dust at a home she cleans for extra cash, she begs the owner, Dr. Kroger (played by curmudgeonly Kevin Kline) to teach her how to play. She’s so desperate to learn that she even offers to clean his home for free in exchange for chess lessons. That struck me as monumental, because it’s clear that Helene and her husband are just barely hanging on financially.

You can see where this is headed. There’s bound to be a BIG IMPORTANT TOURNAMENT at the end of the movie, and sure enough, there is. Along the way, though, Helene has to try to bring her family – including her surly teenage daughter — onboard her new obsession. She somehow manages to do just that and find a new zest for life in the process.

Queen to Play is a soulful, quiet and beautiful film, shot on location in Corsica, France. Helene rides her bicycle everywhere, so we get some nice scenes of her peddling across stunning landscapes with mountains and the Mediterranean Sea in the background, as well as streets and buildings that have clearly been around for generations.

Queen to Play is available on Amazon.com. It’s not rated, though I think it’s ok for ages 13 and older. Note that most of the dialogue is in French with English subtitles. If you don’t ordinarily like subtitled films, give this one a try. You might find that it opens you up to a whole new world of foreign films, which are often more thoughtful and sophisticated than the commercial films made in the U.S.

Jane Boursaw is a family entertainment writer specializing in movies and TV. Visit her at Reel Life With Jane or email jboursaw@charter.net. Jane is an Amazon affiliate so if you use the links in this post to go to Amazon to buy something, Jane will earn a few cents to keep Reel Life With Jane in business. Thanks!

Photos are by Patrick Glaize, published with permission from Zeitgeist Films.

Note from VMB: Just in case Jane’s description and photos from the movie do not inspire you, take a look at Camels and Chocolate‘s photo essay on Corsica and Sophie’s World on the same.

I don’t mind captioned films at all,(really dislike dubbed language where the lips and words don’t match!) but Ken is a reluctant viewer.  Do you shy away from seeing a film with English subtitles?

7 thoughts on “Queen to Play: A Tale of Chess in Corsica”