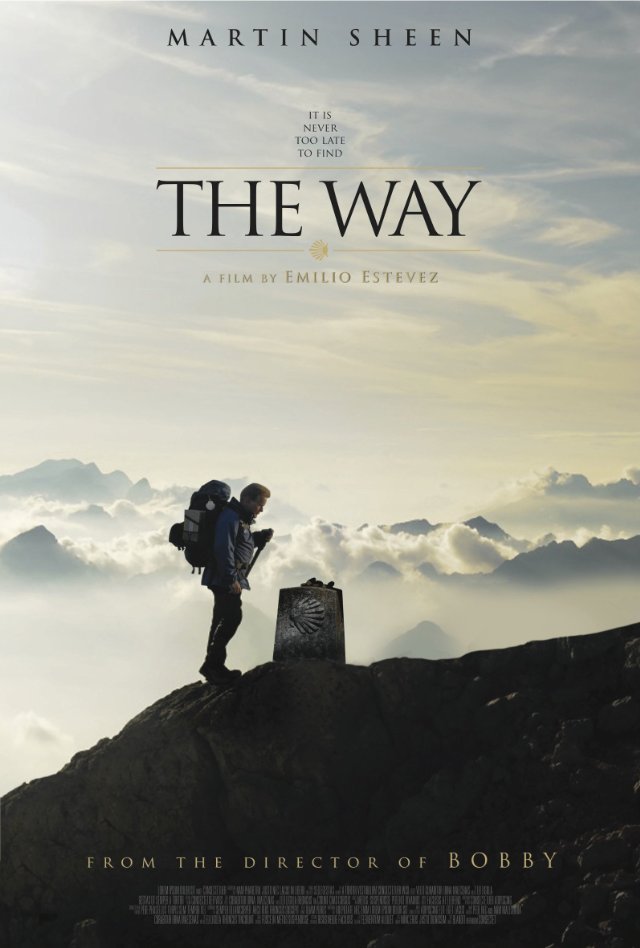 Clearly, I live a sheltered life. I’d never even heard of the Camino de Santiago until watching The Way, a lovely film about a man whose life takes an interesting turn when he goes to Europe to collect the remains of his son.

But first, a little background. The Camino de Santiago,  known in English as The Way of St. James, is a journey that begins on one’s own doorstep and continues 800 kilometers along the border of France and Spain, ending in the city of Santiago de Compostela, where St. James is buried. The city is now a World Heritage site.

You can read more about the Camino de Santiago here at the movie site, including the personal reasons why Martin Sheen and Emilio Estevez wanted to make this movie. But to summarize, the journey has been in existence for a thousand years, and thousands of travelers, a.k.a. pilgrims, make the trip each year across Europe to Santiago de Compostela. Most travel by foot, some by bicycle, and some by horseback or donkey, just as their medieval counterparts did. Some do it for religious reasons or spiritual enlightenment, while others do it for health, travel or historical pursuits. Whatever the reason, it sounds like a great way to escape the rat race we all seem to be on.

Written, directed and produced by Emilio Estevez (whom I’ll always think of as the quirky kid in 1984’s Repo Man), The Way is based on a book by Jack Hitt titled  Off The Road: A Modern-Day Walk Down the Pilgrim’s Route into Spain

The story begins with Tom (Martin Sheen), an American eye doctor with a successful practice in California, receiving a phone call from Europe. His wayfaring son, Daniel (played by Estevez), has died during a Pyrenees storm while walking the Camino de Santiago. Tom has the grim task of going to St. Jean Pied de Port, France to collect the remains of his son, with whom his relationship has been strained.

But once Tom gets there, he decides to embark on the pilgrimage himself to honor his son’s desire to finish the journey. What Tom doesn’t realize is that he’s on a journey of his own. The journey opens him up to a whole new world outside his California bubble, both physically and metaphorically.

And Tom isn’t a young man, so the trip ends up taking several months and poses all sorts of physical challenges. Still, he chugs along like the Energizer Bunny, leaving much younger folks to marvel in his wake.

Despite the fact that he’s initially annoyed with having to interact with his fellow travelers, Tom manages to form meaningful bonds with them. Jack (James Nesbitt) is an Irish writer with a serious case of writer’s block. Sara (Deborah Kara Unger) is a Canadian who’s coming to terms with an abusive relationship. And Joost (Yorick van Wageningen) is a Dutchman who’s trying to lose weight and gain confidence. The interactions between this band of misfits offers some comic relief to an otherwise heavy film.

The Way is funny, profound, and beautiful. It must have been difficult for Sheen to play a man who loses a son that’s played by his real-life son. I would think that’d hit a little close to home, and you can see that emotion on Sheen’s face throughout the movie. He doesn’t just go to Europe to collect his son’s remains; he takes the ashes along on the pilgrimage, leaving bits of ash here and there on monuments, open spaces, and historical structures along the way.

The Way is a wonderful story of hope and renewal, filmed in European locations with a deep sense of history and meaning. It also helps us to realize there’s a big difference between “the life we live and the life we choose.”

Jane Boursaw is a family entertainment writer specializing in movies and TV. Visit her at ReelLifeWithJane or email jboursaw@charter.net. Note: Because Jane Boursaw is an Amazon affiliate, when you click on the link to the book title in this post, although it does not cost you anything extra, Reel Life With Jane will earn a few cents to keep it going.  Photos are used with permission of the film production company.

Vera asks: Have you ever gone on a pilgrimage? Have you visited the northwestern part of Spain? The scenery certainly look gorgeous in this film trailer from YouTube, doesn’t it?