Oh My! I wish I were eligible for today’s giveaway prize! Jane has come up with a superb gift for movie fans. See bottom of this article.

If there’s one thing we can count on around the holidays, it’s lots of great movies with fabulous locations. Let’s take a look at a few movies that had me going, “Wow, I have to include this in my Wednesday Matinee column at A Traveler’s Library!”

Hugo (Directed by Martin Scorsese; 126 min.; rated PG for mild thematic material, some action/peril and smoking; 5 out of 5 Reels). Only the master of film himself, Martin Scorsese, could make a family movie that involves the history of filmmaking. The reason it works as a family movie is because Scorsese slyly blends the history of filmmaking with a very human story about loss, hope and new beginnings.

And yes, the best movies start with a great story, so it helps that this one is based on Brian Selznick’s Caldecott-winning novel, The Invention of Hugo Cabret

. It tells the story of Hugo (Asa Butterfield), a 12-year-old orphan living within the walls of a Paris train station in the 1930s. He’s a good boy who’s trying to make the best of things after losing his dad (Jude Law) in a tragic fire and being sent to live with his drunken Uncle Claude (Ray Winstone) who keeps the clocks running at the station.

After his uncle abandons him, Hugo continues caring for the clocks and survives by swiping scones from vendor carts and dodging the stern Station Inspector (Sacha Baron Cohen) who stomps around with his leg brace and scary Doberman. But Hugo’s real passion is his beloved automaton, and he steals parts to fix the mechanical man his dad rescued from museum archives before his death.

Hugo is not only a beautiful story about a time in France’s post-war history when movies were melted down to make shoe heels, but the attention to 1930s-era detail is magnificent. There’s the fairy tale train station that bustles with activity. The complex inner workings of the massive clocks. Bakery carts filled with warm scones and buns. Wooden armoires with ornate carvings. Wise librarians who love books. And women in knitted berets selling flowers. The whole movie has a Dickensian feel to it. 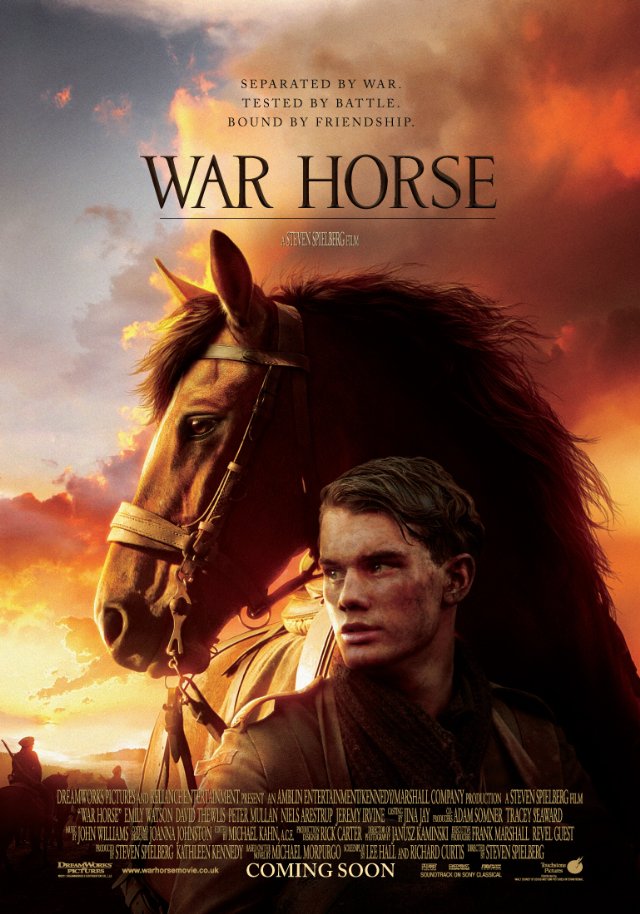 2. War Horse (Directed by Steven Spielberg; 146 min.; rated PG-13 for intense sequences of war violence; 4 out of 5 Reels). If you’ve seen enough Steven Spielberg movies, you can almost spot one at a glance. Lush production with authentic locations, attention to the smallest detail, gorgeous cinematography by longtime collaborator Janusz Kaminski, epic score by John Williams, well-cast actors and believable dialogue. War Horse has all that and more, set against the backdrop of World War I in rural England.

Based on a 1982 children’s novel by Michael Morpurgo and a 2007 stage adaptation, the story begins with English teenager Albert Narracott (Jeremy Irvine) watching the birth of a beautiful colt near his rural farm. Despite his best efforts to get the colt to warm up to him, it doesn’t happen, and the young horse is sent off to auction.

Cut to the auction site, and Albert’s father Ted (Peter Mullan) gets caught up in a bidding war against his curmudgeonly landlord Mr. Lyons (David Thewlis). Even though what Ted really needs is a sturdy plow horse, he ends up using the family’s rent money to outbid Lyons on the young Thoroughbred, much to the chagrin of his long-suffering wife Rose (Emily Watson).

But Albert is thrilled and agrees to train “Joey” to pull a farm plow so the family can plant turnips and pay the rent after the fall harvest. But when a rainstorm damages the crop, Ted is forced to do the unthinkable – go behind Albert’s back and sell Joey to a cavalry officer, Captain Nicholls (Tom Hiddleston), who promises to look after the horse and, if possible, return him to Albert’s care after the war.

But Joey’s journey takes some unexpected turns, as we follow him through a misguided battle, on the run with two young German soldiers, in the care of a French farm girl, pulling heavy artillery up a hill for the German army, and smack in the middle of a battlefield in 1918, where a small moment in the midst of war gives hope that perhaps two opposing armies can work together.

Spielberg doesn’t gloss over the horrors of war. We see muddy battlefields strewn with dead humans and horses, a German gas attack that takes soldiers by surprise, and horses that are shot after they collapse from exhaustion. It’s hard to watch, and I don’t recommend it for kids younger than 14 or anyone who gets squeamish about war scenes and brutality against animals.

I love how the story follows Joey’s journey through several people, but circles back around to Albert, who enlists in the army as soon as he’s old enough, with the hope that he’ll find his beloved horse again. Both Joey and Albert are noble, brave and don’t shirk from their duties and responsibilities.

3. The Descendants(Directed by Alexander Payne; 115 min.; rated R for language, including some sexual references; 5 out of 5 Reels). On screen or off, George Clooney always has that trademark suave air about him. He’s a debonair ringleader who organizes big casino heists (Ocean’s Eleven, Twelve and Thirteen),  a smooth talker who flies around the country firing people (Up in the Air), an escaped convict searching for hidden treasure (O Brother, Where Art Thou?). Never a hair out of place, especially in that last movie. Remember his penchant for Dapper Dan hair cream?

But The Descendants offers a different view of Mr. Clooney — a vulnerable father of two who’s piecing life back together while his wife lies comatose in a hospital bed following a boating accident. Clooney’s character, Matt King, has always been “the back-up parent,” the one who’s never around long enough to know what kind of ice cream his youngest daughter Scottie (Amara Miller) likes, or what his teenager Alexandra (Shailene Woodley) does while away at boarding school.

And it’s just the sort of role that will turn Clooney into a true movie star, not just another pretty face among the Brad Pitts and Matt Damons of Hollywood, not just the guy who always takes the big, high-profile roles. Or maybe The Descendants IS Clooney’s high-profile role in its regular-guy simplicity.

You can tell he’s sort of been heading that way in the past few years, reaching out for different types of roles. In The American, he played a cold-hearted killer (did anyone like him in that role? I didn’t). And in The Ides of March, Governor Mike Morris may have been eloquent on the surface, but he was swimming an ocean of dirty politics.

But I’m not sure how much of an argument I can make here, considering that Clooney’s movie career started out with gigs on The Facts of Life, Baby Talk and Roseanne. I guess he’s been a renaissance man from the start, willing to try anything to further his craft.

The Descendants is a superb movie. As a bonus, we get to see the lush Hawaiian islands of O’ahu and Kaua’i, where it was filmed (there’s a subplot about Clooney’s family selling off a huge piece of prime real estate). And if you’re worried about bawling your eyes out, I can tell you that I usually find something to cry about in every movie, but this one didn’t strike me that way. Part of it’s because we never really get to know Matt’s wife, played by Patricia Hastie, who spends most of the movie in a coma.

The Descendants also has enough humor to keep it from getting too maudlin. Shailene Woodley is wonderful as Matt’s older daughter. Finally, she gets a chance to shine beyond her one-note character on The Secret Life of the American Teenager. Amara Miller is just as wonderful as Matt’s younger daughter. They seem like a real family you’d know from the neighborhood.

And special mention must be made of Nick Krause, who plays Alexandra’s friend Sid. He turned what could have been a clichéd teenage-slacker role into something much more meaningful. There are no stereotypes in The Descendants. Everyone seems like a real person, doing the best they can with the circumstances they’re given.

Jane Boursaw is a family entertainment writer specializing in movies and TV. Visit her at ReelLifeWithJane or email jboursaw@charter.net. 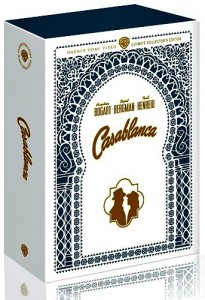 Today’s prize to one person who comments, subscribes, tweets or mentions us on Google+ is a copy of Casablanca, 85th Anniversary Ultimate Collector’s Edition. Tons of bonus features, including Exclusive Passport Holder and Luggage Tag; 48-Page Photo Book; 10 One-Sheet Reproduction Cards; and Archival Correspondence.  Is that an incredible prize, or what?? (You can comment on this post or on an earlier post. Just do it before Thursday, January 12, 3:00 a.m. MST. If you already subscribe by e-mail and want an extra entry as a subscriber, be sure to tell me that in the comments. See complete rules here.)

Thank you Jane for introducing these three movies and for offering the DVD set of Casablanca for one VERY lucky reader of A Traveler’s Library.