Where: The Meadowlands, New Jersey

Brooklyn was never known for its rural landscapes — though there are many of them, if you know where to look — but when I was growing up there I knew of a place that made my hometown seem pristine: The Meadowlands. The vast, swampy section of northwest New Jersey, a wasteland that you could see from Manhattan, had a reputation as a dumping ground for everything from toxic chemicals and refrigerators to — we believed — dead bodies, possibly even that of teamster Jimmy Hoffa.

Art reviewer and painter John Zeaman was not without similar stereotypes when he started walking his standard poodle, Pete, through the Meadowlands, or, as the title of his delightful memoir, Dog Walks Man

, would have it, when Pete started walking him there. “An aura of danger and degeneracy clung to this piece of land like radioactive contamination,” he writes. It is “the Forbidden Forest,” the wild frontier of the manicured suburban New Jersey town to which he and his family have moved from Manhattan, though it is only a short car ride away.

Zeaman doesn’t discover any bodies when he starts exploring the Meadowlands with Pete, though he meditates on the frequency with which dog walkers tend to come across dead people in mystery novels. He does encounter garbage:

Here and there, erosion had worn down the cap of soil, exposing a collage of broken glass, flattened cans, and automobile tires. Tires, I eventually learned, were particularly buoyant because they trapped a doughnut of air when they were buried….Muted dolls stuck their heads out of the ground, eyes fixed heavenward, like El Greco saints.

But he also finds a strikingly wild and beautiful landscape, the complex ecosystem of wetlands that began to develop after the federal Clean Water Act and the New Jersey Meadowlands Commission cleared up the pollution and closed the landfills in the 1970s. On their first outing to this terra incognita, he and Pete reach a rise where: “The view opened up. It could have been the Everglades or the Serengeti Plans.”

Zeaman is a wonderful guide through all the incarnations of the Meadowlands, providing snippets of history and geology from the Pleistocene Epoch to the 1960s, when “methane gas from the decomposing garbage sparked an underground fire in the peat that forms the Meadowlands’ floor… Driving through the stench on our way into Manhattan, my friends and I would howl in disgust.” 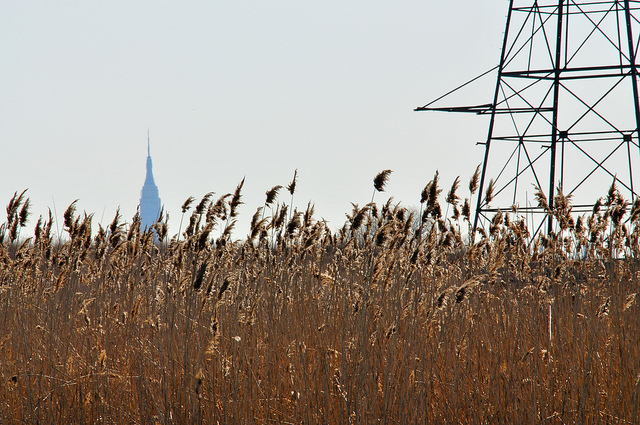 He looks at the landscape with philosophical wit:

I loved the phragmites reeds, which the state Department of Environmental Protection — and the rest of the world, it seemed — branded “invasive” and “opportunistic.” It struck me as hypocritical to malign a plant for its ability to adapt to an area where humans had been so egregiously invasive and opportunistic. I found them exotic and beautiful. In a strong wind, their hollow tubes clacked and clicked like wind chimes.

And he always has an artist’s perspective. Of the presence of trash, he writes:

It could even be looked on as an aesthetic question. Did beauty require purity? Did a small bit of ugliness cancel out something predominantly beautiful? In fact, the opposite case was often made in aesthetics — that beauty couldn’t exist without ugliness, that each defined the other.

This book is about far more than nature, though the dog-walking landscapes and the contemplations they give rise to play a central role. Zeaman also talks about the life of a writer, family life, suburban rituals, urban development, dog walking etiquette… and of course dogs. He’s a keen, unsentimental observer, able to laugh at himself as much as he pokes gentle fun at those around him.

For example, he describes the process of getting a new puppy — to rejuvenate Pete, who is getting older, he initially thinks. But it is not until he takes the new dog to the vet that he becomes aware that he is suffering from incipient empty nest syndrome as his daughter, Claire, is about to head off to college:

“Oh,’ the vet said, after I had lifted the floppy-legged puppy up onto the examination table, “Is this Claire’s replacement?

I think I may have blushed… Such insights into one’s unconscious motives were supposed to happen in a therapist’s office — not a veterinarian’s.

I could just keep on quoting. This is the type of book that has you marking passages and dog-earring pages, in spite of yourself; I tried not to but finally gave in. On every page, it gives you an idea to think about, a turn of phrase to admire. At the same time, the writing is never showoff-y; the prose illuminates its subjects without calling undue attention to itself. I’ve never seen Zeaman’s paintings, but if they’re anything like his writing I’d love to own one.

I even promise not to deface it.

Since the Pet Travel Book Club solicits discussion with readers, we hope that you will leave a comment below with your questions or opinions on Dog Walks Man. Edie Jarolim started the Pet Travel Book Club at her blog, Will My Dog Hate Me.  Edie will be discussing this book from the point of veiw of dog lovers over at Will My Dog Hate Me. She recently announced that she is winding down her work on the blog in favor of another project, which means that she will no longer be contributing Pet Travel columns to A Traveler’s Library. We’re going to miss her wonderful writing hereabouts, but look forward to her new projects.

Disclaimer: The links to the book are here to make it easier for you to get a copy.  Because it is an affiliate link, anything you buy will make a few cents (without costing you any extra) for Will My Dog Hate Me.Photographs are from Flickr with Creative Common License.  Please click on the picture to go to the Flickr collection of the photographer and learn more about each photo.

Even if you have not read Dog Walks Man, you’ll want to leave a comment (or tweet or google + or subscribe) so that you will be in the running to win today’s prize: the novel Good Graces by Lesley Kagan. It is not about a dog. It is set in Milwaukee rather than New Jersey. But it is darned good writing. The only reason I did not review it is that it would be a real stretch to say it lures you to travel. But the publisher sent it to me for review, knowing full well that I might not find it suitable for A Traveler’s Library, no matter how good the book is.  I think you’ll like it. Entries until 3:00 a.m. Friday Jan. 13–a lucky day for someone! See entire contest rules here. BE SURE TO SEE TOMORROW’s ANNOUNCEMENT ABOUT TWO SPECIAL GRAND PRIZES–everyone who has an entry all month will be eligible.

9 thoughts on “Pet Travel Book Club Goes to the Meadowlands”