The third annual Tucson Festival of Books took place on the University of Arizona Mall last weekend, March 10 and 11. This annual event draws enormous crowds to its overwhelming number of programs, but people are as much fun as the books on sale. 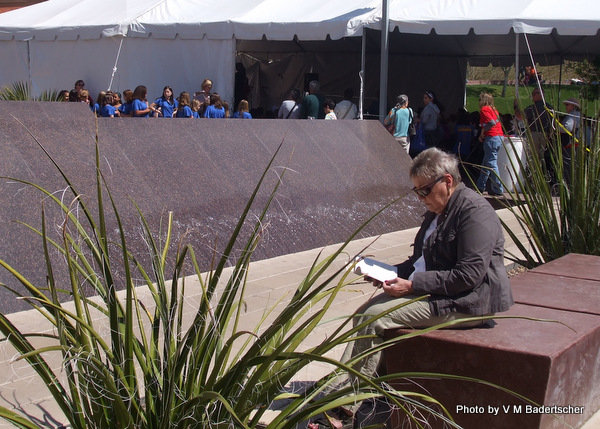 Great people watching at the Tucson Festival of Books, all ages and types of people.

AUTHORS! I was so delighted to find many authors we have discussed here at A Traveler’s Library. With 400 plus authors and 100,000 attendees, I did not have an opportunity to photograph all of them, (We’ve talked about Larry McMurtry, but his speaking site was totally mobbed.) Here are a few of our favorites, with links to ATL reviews.

I was in the process of reading A Taco Testimony and really kicked myself when I realized AFTER her appearance, that Denise Chavez was talking about the meaning of culture. I missed it! But I followed her down to the book signing tent and she told me about the Border Book Festival she heads in Mesilla, New Mexico, and let me take her picture. I hope I’ll get a 2nd chance some time to hear her talk.

I chatted with Brenda  Novak  in the underground patio of classroom where she was going to speak. She told me that she writes a 3-book series every year. While the books in the Arizona-based series that included White Heat was both romance and mystery, she is separating her mystery series from the romances. Next up–a protagonist who is a psychiatrist working with serial murderers.

When I caught up with Holly Tucker at the signing tent after her panel, she said she had just returned from London where she is researching her next book.  All I could get out of her is that it will be another true-life medical history mystery. I’m sure it will be excellent, because Blood Work certainly was.

Jan Cleere is a personal friend and a Tucson writer. She had completed her panel focusing on Arizona historical figures, like the women in Levis and Lace, and was visiting with other writing and publishing friends.

Until I interrupted her, Tucson author Jennifer Carrell was trying to eat a sandwich in the author’s lounge between appearances on various programs.You have not read about Jennifer Carrell’s work here yet, but I realized that was a mistake when she told me that she had just done a panel on using her Shakespeare mysteries as a guide to visiting England!  I promptly bought Interred With Their Bones, the first of her series of Shakespeare mysteries, and you’ll be hearing about it soon. I did read her first work, a best selling non fiction book called The Speckled Monster, about the plague of Smallpox and the discovery of vaccination, and know that she is a skillful and entertaining writer.

So plan your trip to Tucson for next year’s Festival of Books. You never know who you’ll run in to.

I hope that you’ll click back to see the reviews we have done of these authors’ books.

What favorite author have you met in person?

All photos belong to me and I appreciate you respecting my copyright.