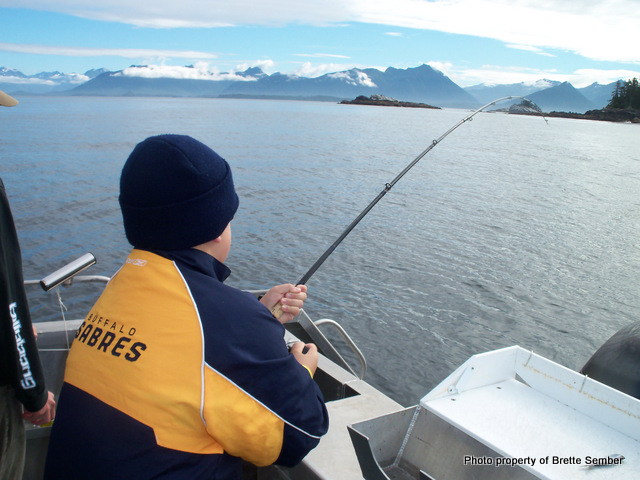 If you’ve ever dreamed of fishing (and eating) in Alaska,  The Fishes & Dishes Cookbook: Seafood Recipes and Salty Stories from Alaska’s Commercial Fisherwomen

by Kiyo Marsh, Tomi Marsh, and Laura Cooper (women who not only catch fish, but cook them in Alaska), is just what you need. Who understands fish better than the women who catch them for a living and eat them regularly?

Tomi owned her own commercial fishery boat for many years and as the women tell it, commercial fisherpeople in Alaska eat a LOT of fish, because it is fresh and plentiful on board and filling up their freezers on land, so they’ve all had much experience cooking up catches. The book is packed with recipes, but it also has stories about the life the women live out on the sea. We learn how Tomi bought her boat, how green her sister was when she joined her, how difficult it is to cook on a moving boat in rough seas, and what overwhelmingly hard physical labor it is to move the parts on a fishing boat and haul in the catch in the coldest and roughest of waters. As if that’s not enough drama, there’s even a love story and a dramatic sea rescue.

The stories are enough to let you almost taste the sea spray and feel the numbing cold of the deep blue Alaskan waters, but the photos take you there without question. There are dramatic photos of the catch (halibut that look like sea monsters and crab so big they seem sci-fi), photos that show the toughness in these women’s souls and lots of shots that show what life is really like on these boats (hint: It’s not a cruise by any means!), but there are also scenes that bring the stunning beauty of Alaska alive: snow-capped mountains, rough seas, harbors full of fishery boats, mossy hills, ice covered buoys and boats, and moving, dramatic skies. The only thing missing is photos of the recipes themselves.

My family visited Alaska two years ago and fell in love. All of us took a nature cruise from Sitka (one of the most beautiful places on earth) among the islands nearby and we experienced the beauty of the sea and landscape (not to mention otters, whales, and eagles) which this book makes real again for me.

My husband and son also went salmon fishing and had a taste of what it’s like to bring in a big catch. We ate salmon for months and months afterwards, and fortunately, I had this book to help me find ways to cook it. It was my bible for a very long time.

Crab, Bacon and Asparagus Frittata, Salmon Nambam, Smoked Salmon Devilled Eggs, King Crab Dip, Shrimp and Sesame Green Bean Salad, Salmokopita, Grilled Rosemay Balsamic Salmon and more are the recipes that encouraged me to think about fish in a more creative way, beyond my staples of grilling with some dill and lemon, or baked or poached with hollandaise. I also loved the very in-depth tips about how to tell when fish is done, how to choose a fresh fish, now to clean a fish, store it and even details about how to clean and store clams, mussels, oyster, geoduck, shrimp, and crab.

This is my favorite recipe from the book (sometimes I just make the sauce and use it on grilled salmon, or on other fish I’ve baked or pan seared) and the good news is that it is amazingly simple:

Pat the salmon fillets dry, and season with the salt and pepper. Set aside at room temperature.

Heat 2 tbsp olive oil in a small skillet over medium-high heat. Add the onion and cook for about 8 minutes, until golden and soft. Remove from the heat.

Bring a large pot of water to a boil. Add the spinach and blanch for several minutes, until the spinach is bright green and wilted. Drain.

Put the onion, spinach, parsley, mustard, sour cream, and heavy cream into a food processor and blend until smooth. Transfer to a medium pot, and set over low heat, stirring occasionally.

Heat the remaining 1 tbsp of olive oil in a medium skillet over medium-high heat. Add the salmon and cook on one side for 3-5 minutes, depending on the thickness of the fish. Turn the salmon over, and cook for 2-4 minutes, or until the salmon is beginning to flake, but there is still a little translucency in the middle. Remove from the heat.

Place about a half cup of hot spinach sauce on each plate. Top with a salmon fillet, and sprinkle with chopped chives.

Brette’s Shortcuts: I often use frozen spinach in this recipe, defrosted and squeezed dry, which skips the whole wilting step. In a pinch, I’ve also used onion powder instead of onion.

6 thoughts on “Something Fishy in Alaska”