Ibiza sounds so exotic.  I remember in the 60s and 70s how many times the Spanish island showed up in the news as a party place for film stars and other celebrities.  Then I heard about friends from Sweden who visited on their long summer vacations. Those lucky Europeans  are only a short plane ride away from such wonderful vacation spots but Americans, in general, have not discovered small wonders like Majorca or Ibiza.

Books about Ibiza don’t show up in my mailbox every day, so of course when a reader contacted me and told me that his independent publishing house —Barbary Press–  specializes in books about Ibiza, I wanted to read one of those books.  He kindly sent me A Valley Wide, and I discovered right away that it is not listed in the U.S. Amazon site, making it more difficult for U.S. buyers to get it.  At the end of this review, I’ll tell you how you can get a copy. 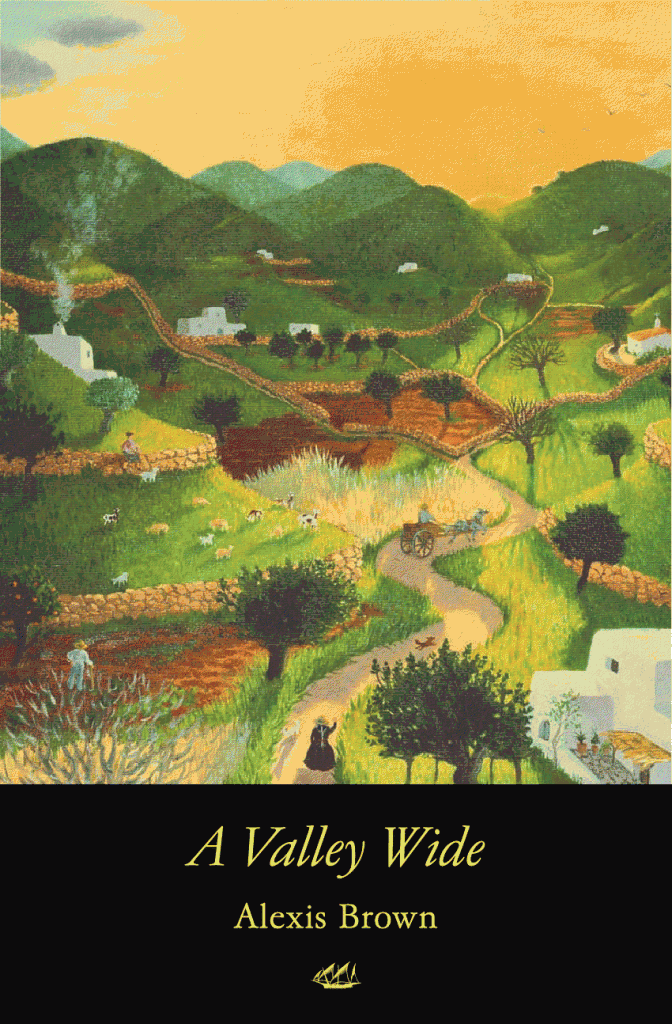 The little book  with the pretty cover picture by Maria Jansen  kept getting pushed to the back of the shelf as I read more current and more accessible books. But last week, I decided to pick it up and learn something about Ibiza.  What I found delighted me.

Alexis Brown, pen name of  Amy Baumann (1922-2009), wrote a book so similar in tone and content to Eric Newby’s  A Small Place in Italy

, that I thought surely one of them must have been influenced by the other’s book. But that would be impossible –even though they both lived in their out-of-the-way homes about the same time–  his book was published long after she first wrote hers, but before hers was published.

When I wrote about  A Small Place in Italy, I talked about how irritating I find most books about Brits or Americans who move to another country because of their condescension toward the locals. But Brown/Baumann, like Newby, totally avoids that pitfall. She and her husband (actually poet and historian Jack Beeching), both writers, had lived with their two children in various places, a nomadic and somewhat bohemian existence.  When things got too crowded in one part of Ibiza, they moved to a quiet valley near San Vicente, where they rented an old stone farmhouse that was partly in ruins. There they tried to grow things the goats would not eat, struggled to have enough water to drink during dry season, and lived like their neighbors. 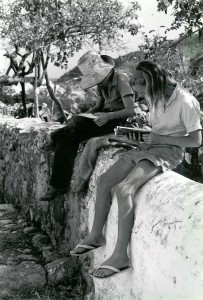 The parents homeschooled their bright, engaging children, and managed to carve out writing time each day. Eventually books filled the house and pets came to stay for varying lengths of time (along with the resident goats and donkey). The children, who go by the names of Flora and Peter in the book, are very bright, curious and self-sufficient–Peter (actually John) with a scientific bent, and Flora (actually Laura) loving all things creative.

Too often, children who are the center of a narrative strike me as priggish little brats, but this was definitely not the case with this winsome twosome. Through their antics and studies, we learn a great deal about the island and its culture.

I was curious about the real-life Flora and Peter, because after reading the book, I was convinced that they must have become hugely successful adults. Indeed, they did. Publisher Davies Martin told me that Laura (Flora) now owns a bookstore in Scotland; and John (Peter) lectures in Bath on the subject of genetics and is a photographer. I felt a swell of pride at their grown-up success, having known them (via the book) as children.

Each chapter subtly focuses on a different factor in their lives and the life of the people–food, fishing, friends, art, festivals, agriculture and more. The writing is graceful and interesting as Brown introduces us to the life of natives who live around them and to new friends among visitors to the valley.

Enclosed on either side by hills, the valley reverberated each little sound like a bell.  If one paused, one could separate the leafy shudder of moving trees and bushes all the way down the mountainside;an occasional voice or the sharp yap of a dog far away; the rattle of ironshod cartwheels along the lower road; the chuck of someone’s axe biting into a trunk.

In a thought almost identical to Newby’s, she says that the life of the people here has little changed in a hundred years, but in the late 60s civilization arrives. The government starts construction on a long-delayed road. The author and her family witnessed drastic changes. The road raised the sights of the locals above their subsistence farming to the possibilities of tourism. The road made delivery of goods dependable compared to the old routes by boat or over rough dirt tracks. The road lured tourists to explore this once-quiet valley.

People who lived in the valley suddenly entered the 20th century and the family ended their three-year stay in the tumble-down house. Even before they moved away, the mother had started writing a memoir of their time in the valley, but the manuscript sat in a drawer for more than 40 years.

I have always been drawn to Ibiza, and although I know the idyllic Valley no longer exists, this book has made me want to see the lovely island for myself.  Once again, however, I’m reminded that as much as I like to read about such adventures, the non-materialistic life of intrepid pioneers like the Amy Baumann and her family is not for me. No risk seemed too daunting and every challenge was met with a can-do attitude. If I WERE to strike off to unknown parts as they did, I would certainly want neighbors exactly like this family had.

Because the author focuses tightly on the time they lived in this particular place, we don’t learn a lot about their previous residences, and I had to do a little research to learn that Baumann moved to Scotland in the 70s where she spent the rest of her life. Her daughter owned a bookstore at the time of Amy Baumann’s death in 2009, one year after the book was finally published. (Jack Beeching died in 2001.) You can learn more about Baumann’s life in Scotland after she left Ibiza in the 1970’s in her obituary.

If you can’t find the book in the U.S., buy it at this online boutique: Ibiza Classics. They take credit cards or PayPal. The book also sometimes shows up at Amazon.co.uk here:  A Valley Wide: An Ibiza Memoir

Links here to Amazon are affiliate links, meaning that although it costs you no more, if you shop through those links (either U.S., France, Canada or UK) you support A Traveler’s Library. THANK YOU! Other link are here to help you in your travels, including an occasional advertising link.

Photographs of  Baumann’s home on Ibiza were taken by Dutch photographer Otto van Noppen in the early 1960’s, are in the book, and were provided for use here by the publisher.

Have you been to Ibiza? Please share your experience. Would you like to live the primitive life in a place not yet catching up with the 21st century?

4 thoughts on “Life in Ibiza Before the Road”