A Week of E-Books For Travelers

These food in Paris photos fit into this week’s celebration of travel e-books, since they illustrate my own simple little e-book Ten Places to Eat Cheap(er) in Paris.  Actually the following are mostly the photos that did not make it into the book. You’ll have to take a look at the e-book to see the better photos. Be sure to see the interview with Donna Hull, author of My Itchy Travel Feet, and a review of Wellfleet, a Guide to Cape Cod’s Trendiest Town. And tomorrow come back and learn about affordable travel through housesitting.

[NOTE: Ten Places to Eat Cheap(er) in Paris is no longer available for Kindle, but you can still purchase it at Barnes and Noble for Nook. Or you can read the version that I published here at A Traveler’s Library.

First rule in Paris–find “your” cafe. Ours was Bistrot Mazarin, just down the street a half block from the St. Germain apartment we rented from VRBO. (That St. Germain link leads to a You Tube video about St. Germain that mentions Bistrot Mazarin and Procope. Other than the fact that it is a commercial video, it is a good guide to the area.) We ate full meals at Bistrot Mazarin, but you can fill up for cheap on salad and the best fries I have eaten anywhere in the world.

Best advice, of course is to seek out the special price meals (prix fixe) that are not just tourist traps–but are a feature of most Parisian (and other European) restaurants. You generally get two or three courses, and drinks are extra.

Now for some tactics that work, but we didn’t try them. Just not our taste. The Indiana part of the name Indiana Cafe on this Latin Quarter edition of a chain restaurant refers to Indians, but the connection of Tex-Mex food  to Indiana was jarring to an American from the Southwest.

We did not, coming from southern Arizona, have any interest in eating fajitas or “Salade Arizona” in Paris, but were amused by the theme of the Indiana Cafe, and the fixed price meals were terribly high priced, although the lunch of “one plat and one cafe” seems rather stingy.

Even the ancient (1696) and famous restaurant Le Procope has few bargain opportunities. Dripping with history,  it is where Benjamin Franklin, Voltaire and Robespierre  among other celebrities, once dined). And although it is not cheap, you’re paying for all that history along with your food. Le Procope also has the prix fixe offering. (We did not eat there–just strolled through–but if I had it to do again, I think I would splurge.)

Among the historic notes on Le Procope, it allegedly was the first place to serve coffee in Paris, thus starting a coffee-shop craze that provided intellectuals a place to hang out, aided the start of the French Revolution (and who knows how many others) and eventually spread around the world.

We dropped off the bus in Montmarte just outside this Illy Cafe. It was mid afternoon and we had not had lunch. Too hungry to seek out any famous, high-end places, which probably wouldn’t be serving at that hour anyhow, we happily ducked into an Illy. David Levowitz, American expat chef, recommends Illy for good coffee. A bargain-priced buffet graces the coffee shop in this Italian chain of restaurants, nearly as prevalent as Starbucks around the world. I was enamored of the bright, modern decor and particularly the “chandelier” of a spiral of coffee cups. (I violated my rule of taking several pictures, and so this one is not very good quality. What can I say? I was tired and hungry.) 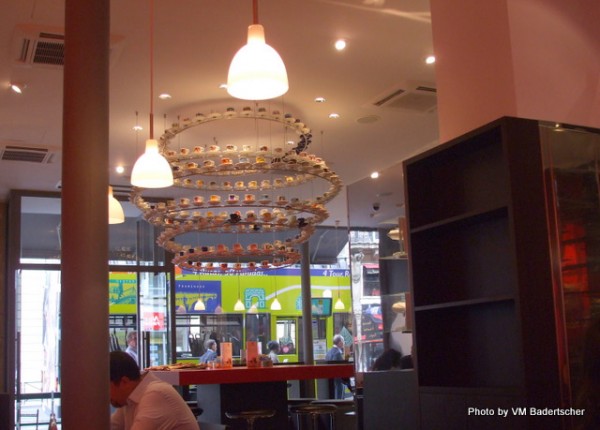 Our favorite way of saving money on food is le picnique. We stocked up at “our grocery store, stuffed the food in an insulated bag we always have with us, and headed for nearby Luxembourg Park. Of course, if you’re a  homesick American, or just want to save money, you can do as these French students (probably Sorbonne) were doing and eat your McDonald’s meal in the park.

This little photo essay on how not to go broke eating in Paris, is my contribution to this week’s Travel Photo Thursday, sponsored by Nancie at Budget Traveler’s Sandbox. Lucky you, you can click over there and see photos from around the world.

But first…be sure to read Pamela Webster’s article about Pet Travel, right above this one.

These photos all are my property, and I appreciate your respect for my copyright.

10 thoughts on “Eating Cheap(er) in Paris”