Of course it is a reason to celebrate! AND to thank you for being part of A Traveler’s Library. Have a piece of cake. 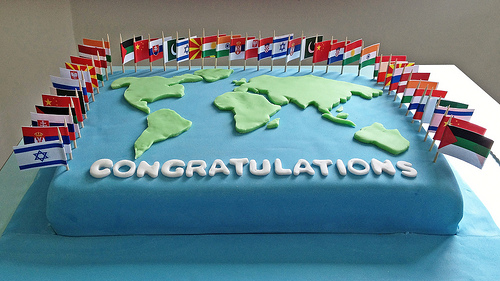 Googling “average life span of a blog” will get you a lot of contradictory, and largely outdated numbers.  However, I know just from tracking broken links at A Traveler’s Library that sticking around for 4 years warrants a celebration.

A Traveler’s Library signed up at Wordpress.com on this date four years ago, and  on January 10, 2009, readers found this post about museums that hold hostage the culture of other countries (i.e. British Museum and the Parthenon marbles). In that very first post, you can see some of the elements that remained a staple at A Traveler’s Library for the following years. 1. I selected a book that would not be found in the travel section of the bookstore, but would add value to the travel experience. I said:

While Loot certainly will not be found in the travel section of your bookstore, it nevertheless belongs on the travel library shelves. It helps readers understand the cultures of Egypt, Turkey and Greece and the long-gone civilizations that inhabited the land the modern countries now occupy. It also adds understanding of a culture the traveler may never have thought about—that of museums.

2. I served notice that we would talk about other things in the travel experience that add to the travelers’ understanding of culture. 3. I invited YOU to join the conversation. That is an important part of what is meant to be a conversation–not just pontificating by the person who owns the domain name.  In the first few weeks of publication, that request often went unfulfilled because readers had not yet found the Library. (Feel free to go back to my early articles and leave a comment. I’ll still see your remark.) For more about my blogging philosophy, see my post 5 Rules this Blog Breaks. Since that, We continue to break the rules and articles just get lengthier–no longer stopping at 600 words.

After six months, A Traveler’s Library moved to WordPress.org as a hosted blog, so we could serve you with features not available on the simpler WordPress.com.  The statistics kept by Google Analytics start at that point–June. Sorry about the first five+ months. Just know that you can add a few thousand to each of these numbers. From June 9, 2009 to January 1, 2013:

The most visits in one day happened on October 31, 2012 when there were 2,050 page views. There is absolutely no logical explanation for these sudden explosions that occur from time to time.

Significant Happenings in Year One (2009)

By May, 2009, A Traveler’s Library had racked up 100 posts, and I chose my ten favorites. Sometimes, but not always, my choices coincide with the choices of the readers. Here are the six most visited posts of all four years:

You suggested several new ideas after the first year, and voted with your visits about your favorite things. One of the things you like is the weekly Thursday photo essay on my personal travels.

The most important addition came in late 2011 when five (later six) contributors joined A Traveler’s Library as regulars. You have soundly supported the new voices and their subjects: music, culture, movies, food, family and pets–all as related to travel.

In the next two weeks you are in for some real treats as every one of us–the Significant Six and me–will be opining on our favorites in our particular fields. By the end of the two weeks, you will have Seven ‘Best Of” Lists to kick off 2013.  What a way to start YEAR FIVE at A Traveler’s Library! As we start the new year, we thank you for your loyalty and your help.