Beware the conclusions you draw when visiting another culture.  For one thing, your experience of a place can change drastically depending on your mode of transportation.

For instance, go by train and you see the unattractive backside of a city but the unspoiled landscape of the countryside, as the train whisks you over hills and along rivers where highways fear to go.  Communities build up around roads, so travel by car will take you through more smaller towns than will the train, but cities are the destination for rail hubs.

But if you really want a close-up view of both the landscape and the people, do as Charles Scott and his 8-year-old son did. They bicycled from the north to the south of Japan, a distance of 2900 miles in 67 days.  They not only could see the mountains and seaside at a slow pace that allowed them to catch things not seen by speeding cars. They also traded the sealed-in comfort of an automobile for exposure to all the raw uncertainties of weather.

In answer to the most-asked question, “Isn’t this too hard for an eight-year-old?” the book answers definitely” NO.”  Of course, Sho is not just any 8-year -old and Charles R. Scott is not exploring a totally new culture.  Scott lived in Japan for a time and speaks Japanese. He married a Japanese woman, so Sho is half Japanese and has also visited Japan, and since his mother works at the United Nations and Sho attends the United Nations school, he has a built-in assumption about differences.

The bike they took is not exactly a tandem (bicycle built for two) because those are not legal in Japan. Instead, Sho pedals along behind his father on a third wheel attached to his father’s bike’s frame by a long stem. While Sho’s pedaling helps the effort climbing over mountain ranges, he is relieved of having to carry heavy loads. Besides pedaling over mountain ranges, the father and son spend some long wet and windy days on the road, and frequently camp by the side of the road.  Japanese traditional inns with bathhouses are a treat where they can warm up and relax aching muscles.

While Scott had a mission of drawing people’s attention to global warming and has been rewarded by the United Nations for his efforts, I was more interested in the cultural discoveries they made along the way. Sho, on the other hand, was in search of the best game room in Japan, and happy with fireworks displays, feeding deer, playing ball and running on the beach–all kinds of 8-year-old favorite activities.  Because of his background in Japan, Scott understood the culture and did not make major faux pas (unless you count the bad decision to get in the ring with a Sumo wrestler), and he sprinkles explanations throughout the book that would be very helpful to any traveler.

Personally, I have never yearned to visit Japan because I generally picture it as overcrowded cities (and shhh! I don’t like sushi).  The bike route, particularly in the north, goes through a lot of pristine wilderness and beside beautiful seaside vistas which sound a lot more appealing. And the people the two met were so incredibly friendly and helpful that you could not help coming away with a great respect for the Japanese.

Three maps in the front help the reader keep track of where they are on the north to south trip. I would have liked an index, to help me navigate through the book, but that is minor in the face of things. Particularly since this is a very well-produced self-published book. I have been refusing, generally, to review self-published books, but decided to take a chance on this one since the subject was so unusual. Rising Sun did not disappoint the way many self-published books have. I only wish that all authors who want to self- publish wrote as well, and were as professional in their presentation.

The book has only b & w pictures, but my favorite illustrations are Sho’s line drawings of their activities. Scott took pictures and videos and kept a blog in 2009, and although it is a bit difficult to find on Google (I hope his publicists will start promoting it as an adjunct to the book) it is worth a look for the color pictures.  You can find their 2009 Japan bike adventure day by day here.

Confusingly,you can easily find information about a ride across Iceland in 2011 which includes Scott’s wife and daughter. Plus there is this from the Huffington Post, where Scott writes columns:

Scott’s endurance adventures with his young children across Japan, Iceland and Europe have been featured in television and radio programs, magazines and newspapers around the world. In the summer of 2013, he and his children will follow the Lewis & Clark Trail by bike, collecting data for a project with Adventurers and Scientists for Conservation. National Geographic Traveler will publish his essays from the trip.

If you would like to receive updates on his latest writings and adventures, send an e-mail to icelandbikeadventure[at]gmail.com.

Certainly sounds like there are more family biking adventure books to come. And that is a good thing. 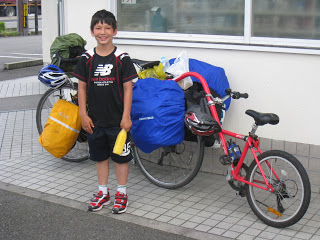 Sho Scott with the fully-loaded bike in JapanPHOTO CREDIT: These photos are from the Japan blog of Charles R. Scott which is linked above.  You can find a video on YouTube by Scott as well.

The book was provided by the publicist for the book so that I could review it, but my opinions are my own.

7 thoughts on “A Father and Son Bike Across Japan”