Frances Kazan bases her historical novel on a fairly well-known period of history–post World War I, but it concerns Turkey–whose history is not widely known in the West.  Because Kazan has devoted years to the study of Turkish history, and has written an academic book about Halide Edip, a woman who played a key role in Turkey’s Nationalism movement, the reader will learn the actual details of the struggles between Allied powers, Greeks and Turks as modern Turkey took shape and the Ottoman Empire ended.

However, have no fear that The Dervish

comes overloaded with facts at the cost of an interesting story.  Kazan has skillfully built a plot full of suspense and romance, as well as one that every traveler will love for the detailed descriptions of place and customs. Nevertheless, the novel has a strong point of view, championing the Turks, so do not expect an objective report on the differences between Turkey and Greece, or power struggles between British and Americans, for instance. (Warning, British readers–your country does not come off well!)

Halide Edip plays a role in the novel, as do other historic characters, but the main character is  a fictional creation.  Mary di Benedetti, from the United States, whose artist husband died in the war, travels to Istanbul to spend time recovering from her loss. She moves in with her sister, the wife of an American diplomat. Mary arrives open-eyed and open-minded, greedily swallowing every detail of the exotic surroundings.  Despite constant warnings of dangers, she naively wanders through poor areas, mingles with Turks and sketches life on the streets.

This passage, when Mary joins her Turkish friends at a demonstration, pictures life on the streets, and also gives us a glimpse of the icons of Istanbul.

There were working men of every age.  Despite their shabby clothes, they walked with heads held high.  Here and there were women in chadors and others veiled from head to toe, all swaying toward the summit like gaggles of black geese.  Arm in arm walked a cluster of younger women in short dresses and heels, light veils draped across their faces.

By the time we reached the top of the hill, the crowd filled the broad expanse of parkland in front of the mosque.  I stopped, stunned by the sight of the massive domes of Haghia Sophia, apparently rising from the walls of Sultanahmet.  I had never realized the two great buildings were so close that they faced each other across the square, monumental reflections of lost empires, Byzantine and Ottoman.

Mary becomes entangled with Turkish politics by accident and her friendship with Halide Edib and her husband draws her deeper and deeper into the world of intrigue of the Nationalists, resisting the British and Allies determination to split up the country for their own purposes. Then she meets an intriguing man who battles for the Nationalists, and he helps her move beyond grief for her lost husband. Along the way her naivete grows into political conviction.

I have only a few quibbles with the way the story is told.  It starts with a Preface, which seems an unnecessary crutch and actually rather old-fashioned. The narrator (Mary) lays out the reasons for writing her ‘memoir,’ a device that reminds me of the Victorian fondness for “discovered” manuscripts.  Similarly, the novel seemed to end awkwardly–with sudden summing up of events, history mixed with the novel’s own stories, rather than a more simple choice of ending.  I found the finale of Mary’s Turkish romance to be particularly unsatisfactory and abrupt.

A mark of an inexperienced novelist–although she is clearly a talented writer–Kazan drops in sentences frequently that are meant to build suspense.  Again, this gives a rather old-fashioned air, as when the narrator says things like, “Little did I know the situation was about to become more complicated.”  I would dub that melodrama rather than the drama that the writer probably means to convey.

Nevertheless, it is a gripping story that will pull you through to learn how Mary survives. (No suspense about “if” she survives, since she is telling us the story.) And if you like, as I do, to learn the inside story of historic events, this book will certainly fill you in on the end of the Ottoman empire.

Unfortunately, I was reading a ARC (Advance Review Copy) in digital form that was not properly formatted, and that made the reading difficult. You will not have that problem when you read the finished print version. 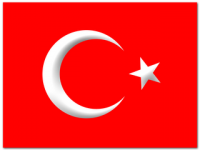 Have you traveled to Turkey? If so, did you find reminders of  the first World War and its aftermath, or did you focus on earlier Byzantine and Ottoman history?

Note: Photographs are from Flickr and from Wikipedia, used with Creative Commons license. Click on the photo to learn more.  The publishers provided a digital copy for review, but my opinions are my own.  I disclose affiliate relationships. The book cover and title link to Amazon.com for your shopping convenience. I earn a few cents when you shop there from my links. THANK YOU!