He’s baaaaccckkkk… Norman Bates has returned to our lives, and this time, in a TV series called “Bates Motel“ that premiered on A&E Monday, March 18, 2013.

This contemporary prequel to Alfred Hitchcock’s “Psycho” takes us into the psyche of young Norman Bates, played by Freddie Highmore in a role that’s sure to make us forget his sweet-kid characters in “Charlie and the Chocolate Factory” and “August Rush.” We learn more about Norman’s twisted relationship with his mother, Norma, played by the brilliant Vera Farmiga.

After a tragedy involving her husband — about which we never quite get the full story — Norma buys an old motel on the outskirts of the idyllic coastal town of White Pine Bay. As the two attempt to seek a fresh start there, they learn that the town isn’t quite what it seems, and the locals aren’t so quick to let them in on their secrets.

Then again, the locals probably haven’t dealt with anyone like the Bates before.

While I had a few issues with the premiere episode — namely, that the violence seemed sudden and gratuitous, and I wished they’d taken more of a suspenseful Hitchcockian stance — I still think the show has legs. I’ll give it a few more episodes.

“Bates Motel” is moody, has an iconic backstory, and the casting couldn’t be more brilliant. Freddie Highmore even looks like a young Anthony Perkins, though as Farmiga said in this behind-the-scenes featurette, “We’re not remaking ‘Psycho,’ we’re using it as an inspiration.”

The chilling house and bleak setting appears to be plucked from the “Psycho” set and dropped into this show. In reality, the famous Bates home and motel were recreated for the show at the former Jackman Landfill site on 272nd Street in south Aldergrove, British Columbia.

As the house is a character unto itself, I’m glad they didn’t shirk on the setting (although the top of the house was computer-generated in post-production – check out some set photos here). Just seeing the house on a screen is creepy enough; the cast and crew must have experienced a few chills stepping onto the set. 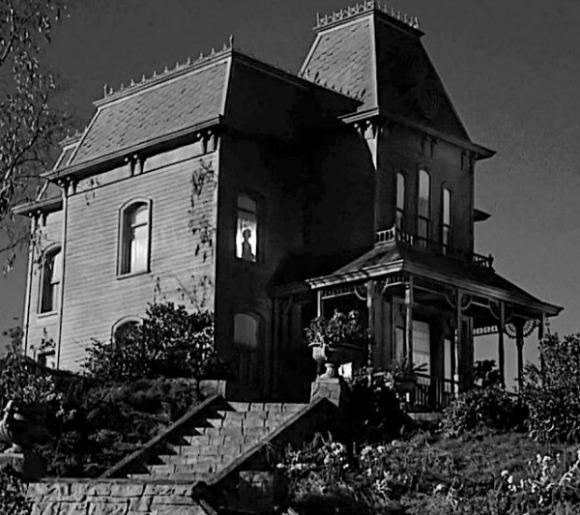 I’m sure “Psycho” fans will be flocking to Aldergrove to catch a glimpse of the house and motel. According to Wikipedia, it’s a small town within the jurisdiction of the Township of Langley, a municipality within Greater Vancouver. Aldergrove, which has a population of approximately 12,000, is 59 kilometers east of Vancouver and is home to one of the Lower Mainland’s five border crossings, connecting Aldergrove and Lynden, Washington.