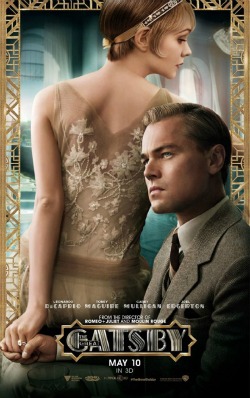 I was a little worried about “The Great Gatsby.” The trailers featured modern music by Kanye West and a glossy production right out of the pages of Vanity Fair. But the movie doesn’t disappoint, and the $51.1 million box office draw on opening weekend is evidence of that. And travelers looking for clues about the original Great Gatsby location in Long Island are going to find Australia instead.

Director Baz Luhrmann brings his lush cinematic vision to the big screen, and all you have to do is settle back and take it all in. I even saw it in 3D (which I generally don’t do if given the choice), and would say it’s best seen this way. The 3D version really makes the decadent settings, posh decor, and out-of-control roadsters jump off the screen — in a good way.

If you’ve read the classic novel by F. Scott Fitzgerald, you know the story. Leonardo DiCaprio plays Jay Gatsby, the wealthy, mysterious and emotionally damaged man who moves into a Long Island mansion — make that palace — during the 1920s. Gatsby makes a name for himself by throwing lavish parties with crowds of people, fireworks and confetti, scantily-clad dancers and all the food and drink a reveler could want. 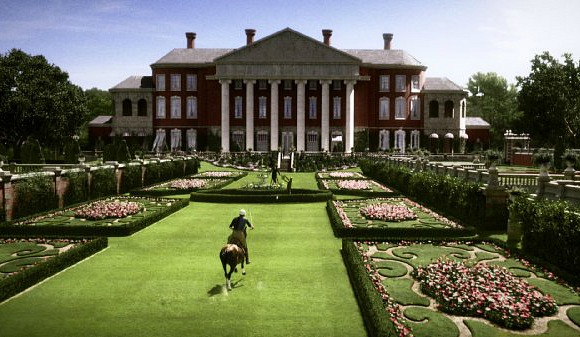 But we know his ultimate goal here. It’s all for the singular purpose of winning back his one true love, Daisy Buchanan (Carey Mulligan, who suits the Jazz age well). Daisy’s husband, Tom (Joel Edgerton), is way too preoccupied with his own indiscretions with his mechanic’s wife, Myrtle Wilson (Isla Fisher) to pay much attention to his young wife’s goings-on. But every night, Gatsby takes to his dock to gaze upon that green light on the dock across the bay. Daisy’s dock.

The story is told through Gatsby’s neighbor, Nick Carraway (Tobey Maguire), who also happens to be Daisy’s cousin. Gatsby calls upon Nick to engineer a meeting between he and Daisy, and in the process, Nick witnesses a series of events that ultimately reveal Gatsby’s tragic flaws. 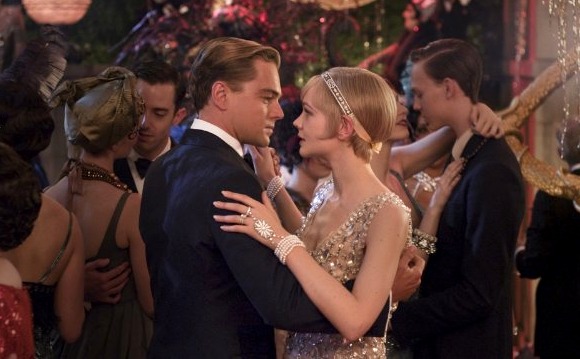 I wondered how the movie would tie into the book, and whether it would be too far removed from the pages to even resemble the Fitzgerald tale. But I needn’t have worried. Maguire’s introspective narration is the perfect way to meld the book and screen together, and Luhrmann slyly blends the actual words into the movie — the letters fading in and out as the story is told.

I love the visual feast offered up by Luhrmann’s movies, and “Gatsby” is a massive buffet of color, style and sound, although oddly, the trailers actually offer more in the way of music than the film itself. We hear bits and pieces of music in the film — modern pop stars like Jay-Z, Kanye West, Fergie, Beyonce, and Florence and the Machine, mixed in with era-specific music by Cole Porter, Fats Waller, Jelly Roll Morton and others.

Perhaps my favorite scene involves a wild ride in Gatsby’s yellow roadster, the car veering and catapulting down the highway with glee. This scene, in particular, is what 3D movies are all about. Another scene involves the wind blowing through a sitting room, with the opaque curtains whipping magnificently around the room and people in the room. Magnificent. 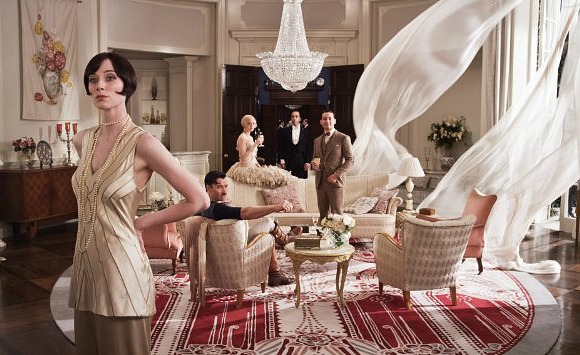 Maguire and Mulligan infuse their characters with everything Fitzgerald ever could have wanted, and Bollywood actor (though he hates that term) Amitabh Bachchan plays Meyer Wolfsheim, with cutie-patootie Callan McAuliffe playing a teenage Gatsby in flashbacks.

Maybe “Gatsby” will finally earn DiCaprio that elusive Oscar. He’s clearly one of the best actors of his generation (and oh, that smile, those eyes), and he somehow manages to throw everything into the title character: hope, heartbreak, longing, love and tragedy.

DiCaprio said he wanted to play Gatsby because he was drawn to “the idea of a man who came from absolutely nothing, who created himself solely from his own imagination. Gatsby’s one of those iconic characters because he can be interpreted in so many ways: a hopeless romantic, a completely obsessed wacko or a dangerous gangster, clinging to wealth.” 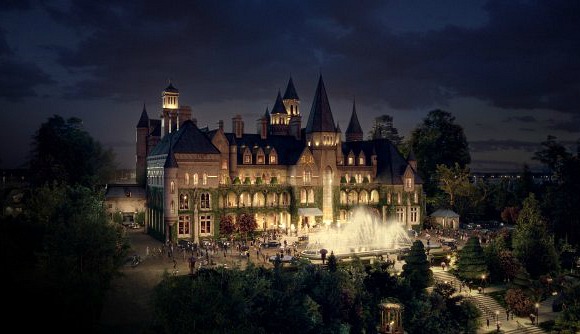 While “The Great Gatsby” is an American story that takes place on Long Island, the movie was actually filmed on Luhrmann’s own turf, Australia. He initially decided to film the movie in New York City, but moved the production to Australia, in part, I’m sure, because the $126 million film reportedly qualified for financial incentives from the Australian government. With a high-budget film like “Gatsby,” I suppose any financial help is most welcome.

If I have one complaint with the movie, it’s that at 142 minutes, it runs a bit long. After letting  Gatsby’s life and times wash over you for two and a half hours, you almost feel like you’ve been to one of his parties or perhaps taken a ride in that yellow roadster.

While audiences will see some of the Australian landscape substituted for 1920s New York and Long Island, soundstages and computer animation ultimately helped create a setting accurate for the period.

If you want to book travel to the Australia Great Gatsby locations, here’s where to go:

JANE’S REEL RATING SYSTEM:
One Reel – Even the Force can’t save it.
Two Reels – Coulda been a contender
Three Reels – Something to talk about.
Four Reels – You want the truth? Great flick!
Five Reels – Wow! The stuff dreams are made of.