A Book for the Arab World in Troubled Times

I wrote this review of The Woman Who Fell From the Sky, one of my favorite books of the year, in June, 2010. Even though Yemen does not make my list of desirable travel destinations, Since Yemen was one of the first countries to experience rebellion during the current unrest rolling across the Arab world, I wanted to revisit it. You will learn to know Yemen, and perhaps understand a bit better what is going on there at the present time as hundreds of thousands of people demand the president step down. END_OF_DOCUMENT_TOKEN_TO_BE_REPLACED 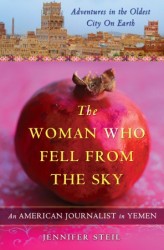 Book: The Woman Who Fell from the Sky: An American Journalist in Yemen: Adventures in the Oldest City on Earth (NEW 2010) by Jennifer Steil

She was a woman

who fell from the sky

in robes of dew

and became a city.

Steil is invited to teach the principles of journalism to writers at an English-speaking newspaper in Yemen. Her task is complicated by the fact that few of them can write in English, none have ever studied journalism and they have no idea how to start a story, track down sources, or get both sides of a controversy. Additionally, her boss, the publisher, works as media adviser for the president of the country. No conflict there, he assures her.

When it becomes obvious that her short initial stay will not do the job, the boss asks her to come back and stay for a year as editor of the paper. We, as readers, are immersed in the world of getting out a newspaper when the male reporters are work on their own schedule, and the women cannot go out alone, interview men, or stay at the office after two p.m.

Her job allows her (and us vicariously) to travel to other parts of Yemen and get a fairly good view of life in that country. Although she writes with a reporters verve, I kept slipping into fairy tale mode because this world seems so unrelated to mine.

We share her amazement to learn that underneath the long robes, the women wear skin-tight jeans and sparkling tank tops. I had to wonder as I plunged eagerly through chapter after chapter, if I would have been able to be as even-handed as she, as non-judgmental at the practices she observed.

As a Western woman, she dressed very conservatively, and wore a scarf, but the Yemenis considered her, in a sense, sexless. She could go alone on the streets, even at night, although she would be verbally harassed. She could go with men to restaurants where women generally did not go. They even invited her to chew qat (the mildly intoxicating leaves that Yemeni men are never without) with them. Although I still have no desire to go to Yemen, Steil paints an attractive picture.  Describing her first view of the city, she says:

Sand-colored mountains rose from the plain in every direction…Below us stood the fantasia in gingerbread that is Sana’a’s Old City, a cluster of tall, square, cookie-colored homes trimmed with what looked like white frosting, surrounded by thick, high walls.  Sabri pointed out some of the more prominent of the city’s hundreds of mosques, liberally sprinkled across the city in every direction, their slender minarets thrust perpetually toward God.

I told readers of A Traveler’s Library early this year that my favorite book of the year would be The Invisible Mountain, about Uruguay. Now there’s a real horse race. The Woman Who Fell from the Sky won my heart in so many ways. I urge you to read it, partly because of the political realities that are important for the rest of the world to understand, but mostly because it is just a darned good book and belongs in a travel library.

I would be remiss not to mention that the book gets a bit gushy at the end. I wasn’t going to give you a spoiler, but for those who don’t care about spoilers, or who love to dish the dirt, here’s an scandal article in the London Mail on line edition. If you read the article, keep in mind they are going on about a section that is less than a tenth of the book and misleadingly make it sound as though it is the main book. They need a coach like Steil to show them real journalism.

Jennifer Steil is on Facebook, where you can see pictures of her with the love of her life.

Isn’t it interesting that my two favorite books have been of countries that I knew little about and that seemed impossibly exotic?  What do you make of that? What destinations make YOUR favorite travel books?