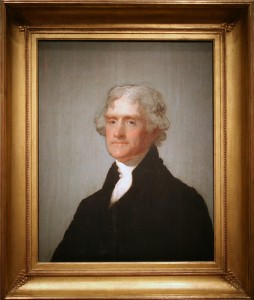 If you think of our founding fathers as a bunch of old guys in wigs who had their noses stuck in books and their travels limited to the Eastern Seaboard, think again. Well, the wig part is right.

Thomas Jefferson, Benjamin Franklin and John Adams took advantage of their ambassadorial positions in Europe to see the (civilized) world on adventurous road trips. As a matter of fact, John Adams son, John Quincy Adams even went as far as St. Petersburg, Russia when he was only 14 years old–but that is a story for another day. Today we are tracing the footsteps of Thomas Jefferson’s Travels in Europe, 1784-1789

, a continental grand tour that any post grad backpacker traveling in Europe would envy today.

All things considered, the conditions of travel probably did not always rise to the luxury of staying in hostels and traveling third class on the train.  And that is one of the things that I liked about this book, it manages to recreate for you, not just the route that Jefferson took, but the conditions of travel of the day. Having to change horses every 10 to 12 miles and changing wheels on the carriage every couple of days meant slow progress, indeed.

At least he did not have to wash his own socks, since he had servants with him to ease the way. Shackelford says, “Jefferson traveled so light that one small trunk held all his clothes, even though he did have a lot of washing done on the way and bought occasional extra clothes, such as canes, gloves, hats, and stockings.”

In between  overnights at inns which were of questionable character, Jefferson visited the great houses of Europe, and not because he wanted to be wined and dined in high style. No, always a farmer at heart, he took copious notes about the plant life, the growing season and conditions. He also lugged along with him some books on architecture, another fascination, and studied the new styles of building that he later copied in designing Monticello, the University of Virginia and the State Capitol of Virginia.

Following in this scholarly vein, Shackelford reports, Jefferson purchased guidebooks and maps at each important stop along the way, to help him navigate in foreign lands. The impressive map of his journeys that fronts this book describes three large loops around England, France and the Netherlands into what is now Germany. A smaller loop leads from southern France, along the Mediterranean and up into what is now Italy.

In February 1787 he set out from Paris on a twelve-hundred-mile trip that lasted until early summer.Quite a road trip. Thanks to his journals and letters and strict accounting for expenses–which always seemed to outrun his budget–we have a pretty detailed record of his travels. In a letter to his secretary, William Short, he said, “architecture, painting, sculpture, antiquities, agriculture and and condition of the labouring poor fill all my moments.”

This book, itself scholarly, is crammed with footnotes and a lengthy bibliography.  How enticing, though, to think of following Jefferson’s route. Someone needs to make an everyday guidebook  of Jefferson’s travels through Europe that we can all follow, but until then, Shakelford’s book can be our travel guide for our own road trip around Europe.

We made a trip to Boston last month, and I wondered if I could think of any travel literature about Boston to talk about here. I would definitely have to investigate this mystery. We took a day trip to Martha’s Vineyard and saw the Jaws movie sites, but I have already told you about that thriller as a travel movie. END_OF_DOCUMENT_TOKEN_TO_BE_REPLACED

(Since Robert Todd Felton’s computer decided it did not want to blog today—died on a train to New York– I’m filling in with more thoughts on Boston, the subject of our prize book.  Felton will be back on Monday, and we will have the drawing for his travel book on Boston as scheduled, after midnight MST Saturday, Feb. 28. Comments you leave on this post will count toward the drawing.)

When I think of Boston, I think of 1776, the beginnings of the United States of America, and some amazing leaders. John Adams, my favorite founder, has been the subject of many biographies, but I can’t imagine any  more satisfying than John Adams by David McCullough. A little American history must go on the traveler’s library shelf in preparation for a trip to New England.

As I write, John Adams stares directly at me from the Gilbert Stuart painting reproduced on the book jacket.  He looks stern, intellectual, but also approachable and human. Alternatively, you may get the paperback book which cheats history by using a picture of Paul Giametti, who played John Adams on television.

McCullough portrays every detail of life in John Adam’s New England and Boston and how he hated to go down to Philadelphia for sessions of the Continental Congress. But traveling to Philadelphia, despite danger and outbreaks of disease is only one of the multitude of sacrifices made by the founders as they groped toward a democracy.

McCullough scores again with his book, 1776, a day by day tracing of the events of the beginning of the revolution.  So many things could have gone wrong. Our army was weak, our navy non-existent and our leaders playing the whole thing by ear. Perhaps a quote from John Adams explains the final outcome. “We cannot ensure success, but we can deserve it.”

And here’s an English proverb for you—“A stumble can prevent a fall.”  So have you stumbled your favorite post from the traveler’s library,yet?