For the Traveler Who Reads

It goes without saying these days that if you are a dedicated reader and you travel, you must have an electronic reader of some sort.  And, of course it helps if that reader has e-mail and Wi-Fi capability. Do yourself a favor and get an e-ink screen, so you can read on the beach or at the Parisian sidewalk cafe. If you choose the new Kindle Paperwhite,  it even has built in illumination for reading in bed. Unless you want a larger tablet, I think Paperwhite is the best for travelers. ( UPDATED PRICING 11/2013: With Wi-Fi, $119 or $179 depending on whether you get 3 G which makes it accessible worldwide.)

For the Traveler Who Writes 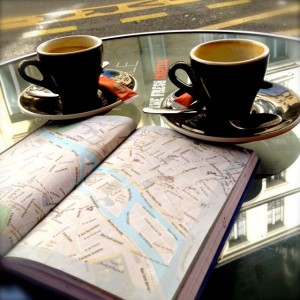 Did you ever sit down to write in your travel journal and think, “I wish it had maps” or “I wish it had a graph page or two”. If you’ve dreamed of having a custom journal made just for you–Bound For Anything journals and memos are made for you. Literally.  You go to the web site of Bound for Anything, choose the exact kind of pages you want to be added to the blank or lined pages in your journal (like city maps, shown here) and they bind it and ship it to you. Voila! a custom travel journal. And to make it easy for you to gift your favorite traveling writer, the website features a gift card. So make your own, or send a gift card to your favorite traveler. Free shipping should be available in November. So don’t wait. ($15 to $55) (NOTE: The journals are 4″ x 6″–pretty small, and the Memos are a half inch smaller.) END_OF_DOCUMENT_TOKEN_TO_BE_REPLACED

SPAIN WEEK at A Traveler’s Library

clearly aims at an entirely different demographic than this reader. I am definitely not the target audience, which seems to consist of those who are equally enthralled with partying and checking off historic sites.

On the positive side, Jamie Maslin writes travel stories, the best way to present travel memoir. He peoples these stories with a few interesting characters, although he tends to focus on people his own age, including westerners. All we learn about older Iranians (older than college age) is that they are either someone’s mother (who cooks fantastic meals), someone’s  father (who is amazingly generous at picking up tabs), or an outspoken taxi driver.  On the plus side, Maslin achieves his overall goal of humanizing Iran in the face of pretty universal demonization. And he writes humorously.

Finding a shared cab going to Masuleh was no drama but the drive there was, especially for some poor chap we saw riding toward us on a motorbike.  He made the understandable mistake of trying to ride one-handed along a potholed road whilst carrying a tray of bread and wearing no crash helmet–as I’m sure we’ve all done from time to time.

On the other hand Maslin’s enthusiasm became alternately endearing and bothersome. A writer should not be equally enthusiastic for centuries-old sites and the novelty of whiskey in cans. He seems to bend over backwards to present a positive picture that will be at odds with mainstream thought about Iran. Yes, the people of Iran are hospitable, but that is not exactly shocking news. They are a desert people. Desert people have a strong culture of hospitality.

These tidbits of shallow understanding cast some doubt on the frequent ‘history lessons’ introduced into his experiences. Because his general tone does not convince the reader that he comes to the task with a deep understanding of history, footnotes might have been helpful.  Whose version of history is he telling us? Particularly since the history he relates seems suspiciously slanted to his anti-war, anti-U.S. and British government views.

One of my problems, no doubt, is that I have read a lot about Iran in the last couple of years and that leads to comparisons.  I much preferred the deeper understanding of culture and history brought to the subject by Hugh Pope in Dining With Al Qaeda

. (You can read my review here.) If you have a chance, compare Maslin’s three paragraphs on the Hafez tomb in Shiraz–emphasis on the similarity of Hafez’ poetry to a modern band that he mocks throughout the book–to Pope’s chapter on Hafez and his analysis of how revealing it is of Iranian thought.

I also preferred the excellent Saved by Beauty

by Roger Housden (You can read my review here.) Housden sets out, as Maslin does, to humanize Iran, but his narrative seems much more balanced to me, admitting deep problems in the society. Housden writes in depth about the life of Hafez, who it turns out was an outsider and a free spirit who resisted the Islamic ban on buying and drinking wine. Knowing those things would have served Maslin well as he compared Hafez to a German rock band. It also would have provided context to his discussions of the young people he had met in Iran.

Is it unfair to compare these three very different books? You have to decide for yourself which approach you prefer.  Understanding people in other cultures–particularly the West understanding of Muslim countries–is critical for our global economy and for peace. Therefore, readers need to look for the most solid information they can find.

The golden age of travel writing (late 19th and 20th century) nurtured British travel writers richly schooled in the classics with historic references galore (sometimes annoyingly printed in the original Greek). Instead of classical references, contemporary British writer Jamie Maslin refers to recent comedy movies and fleetingly famous movie stars. Younger readers will get those references now, but ten years from now most readers will be saying, “Who?” Furthermore, his reading preparation for the trip consists of the Lonely Planet: Iran

guidebook. (Love their guidebooks, but he might have looked at their suggested reading section before he plunged into the country.)

Which of these three books would you choose to read? Or if you have read one of these, or another book that helped you understand Iran, please tell us about it in the comment section below.

Note: A reader’s comment about tourism, prompted me to give you this link to learn more about tourism in Iran. For an attractive sales pitch on why it would be worthwhile to travel to Iran, visit their official tourism page. Like Syria and Libya, Iran is very high on my dream destinations list.

Disclaimer: The publisher provided a review copy of this book, which obviously did not influence my opinion.  Links here to Amazon are affiliate links. That means that although it costs you nor more, when you shop through those links, you are supporting your favorite website–A Traveler’s Library thanks you.

The photos used in this article are from Flickr and are used with a Creative Commons license. Click on the photo to learn more about the photographer and see more of his/her work.