Christmas traditions differ around the world but many traditional ways to celebrate Christmas find their roots in medieval times. During that era, the church promoted a serious celebration for the birth of Christ.  Medieval Christmas is still with us.

The Twelve Days of Christmas

Although the church was serious, more popularly the main holidays in medieval times were a time for

“feasting, dancing, singing, sporting, gambling, and general excess and indulgence. Part of the cause for celebration undoubtedly arose from the security that came with winter. True, the weather could be harsh and cruel, and food and stores could be in short supply, but political enemies were unlikely to start a war or undertake a siege in such conditions. One was alive, safe from enemy threat, surrounded by friends and good company, and had enjoyed plentiful harvests and good hunting with which to cover the tables and fill the belly. By all means, celebrate.” (Medieval Celebrations, by Daniel Diehl and Mark Donnelly, p. 22).

From these early celebrations of Medieval Christmas come many ways we still celebrate Christmas today.

The origin of the word Wassail comes from the Old English  term, waes hael (be well, or good health). A large bowl of strong, hot punch (usually based on ale, with spices and honey added) was lifted by the host, who would say ‘waes hael.’  Everyone would respond with “drinc hael ” (drink and be well). Friends would finish that bowl of deliciousness, singing and laughing, and then head off to the next friend’s house. This led to the song,  Here We Come A-Wassailing, as people would move from house to house singing, and today’s caroling is a tradition remaining from medieval Christmas. 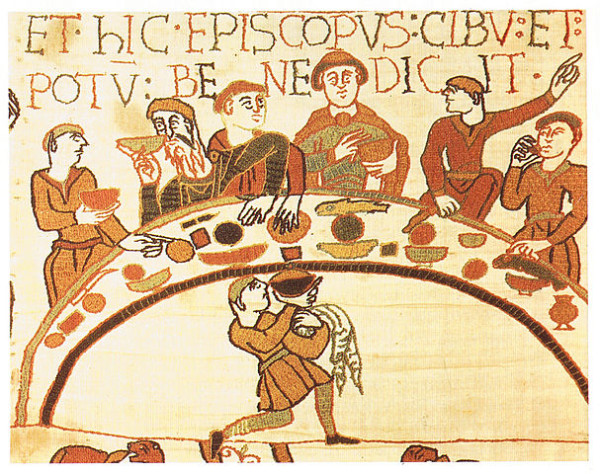 Medieval feast of William the Conqueror. From Bayeux Tapestry. In the public domain. Scanned from Maggie Black’s “Den medeltida kokboken”, Swedish translation of The Medieval Cookbook

A Christmas feast was quite welcome at medieval Christmas, as the cold set in and food became scarce. People would slaughter animals that they didn’t intend to keep through the winter, thus ensuring a great feast. Peasants would receive a loaf of bread and some meat from their lord. The most popular feasting food at the time was goose, if you could afford it. In 1213, King John of England (who could obviously afford it) held a Christmas feast – and ordered a great amount of food to serve his guests. Records show that he ordered: 10,000 salt eels, 24 hogshead of wine, 200 head of pig, 1,000 chickens, 50 pounds of pepper, 2 pounds of saffron, 100 pounds of almonds, and 500 pounds of wax (for candles because you have to see to eat!).

In 1223, St Francis of Assissi (Italy) created a crèche (crib) and Nativity scene with animals in a cave in Italy. He held a Christmas Eve Mass and nativity pageant there. Later medieval traditions included Mary and Joseph (and later, shepherds), in addition to the farm animals who kept the baby warm. Today’s town square large Nativity scenes, as well as the smaller plastic lit outdoor ones, and indoor figurine scenes, all got their inspiration from St Francis!

In pagan times, people would bring in evergreens to bring ‘life’ to their solstice celebrations. In the middle ages, on Christmas Eve, Germans would carry an evergreen tree through the town and then erect it in the town square, to be decorated with paper flowers. After a great celebration (and feast), the tree was burned. What a great way to keep warm!

Wherever you travel–England, Poland, Germany, Italy, France–and the United States still use many customs of a Medieval Christmas.

Which Medieval customs do you still follow in your home?