I have never given much thought to the Channel Islands off Santa Barbara, California, including San Miguel Island.  I was vaguely aware they are there–out in the Pacific just beyond view from shore.  And that they are wildlife preserves, suitable for visiting by sea, or going ashore if you want to hike and explore nature–but only with a permit, I figured. 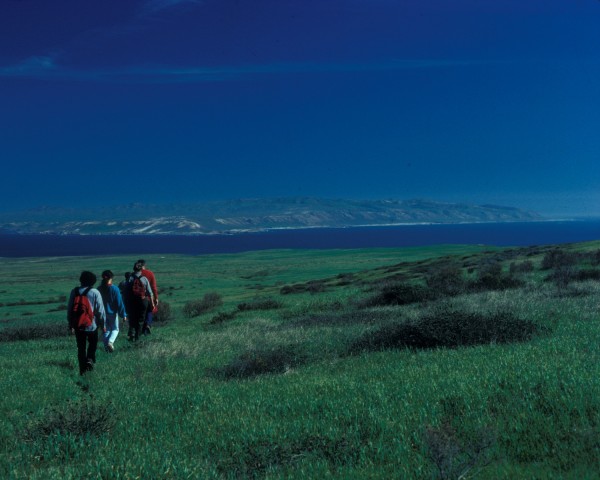 In fact there are five islands, and they comprise the Channel Islands National Park, one of the least-visited of America’s National Parks. Because of their isolation, like the Galapagos, they are chock full of odd and singular species.

But in San Miguel, author T. C. Boyle is interested in the odd and singular species of humans who inhabited San Miguel Island long before it became a National Park.  His fictionalized history follows two families–the Waters family in the late 1800’s and the Lester family in the 1930’s.  Boyle deftly tells the story of these families from the point of view of the women. His novel explores not only human psychology but also sharply defines the enormous changes in attitudes, beliefs, and the effect of technology, communications and war on American life over a period that equals an average life time.

All the island inhabitants are refugees of a sort–from the horrors of war (Civil War and First World War), from illness, from loneliness, or from too much stress.

The narrator in the first section, Marantha, who is dying of tuberculosis is brought here by her domineering Civil War veteran husband with the promise that the pure air will help her. She loathes the island and finally, furiously demands to be taken off. The husband has invested her money in a sheep ranch on San Miguel Island, and the manual labor and chipped china, noisy seals, and constant filth make life unbearable.

Marantha’s adopted daughter, a bored teenager trapped far from civilization with only a none-too-bright teenage farm worker to entertain her, constantly schemes and tries to get her way by seduction. Edith, the daughter, narrates the second section of the book, and my heart went out to her.  A third woman in the household, who does not get to tell her own story, is the Irish maid/cook, nearly as young as the daughter, but without her big ideas.

The male author’s hat-trick of capturing the voice and personality of these three women and their various stages of disgruntlement is not the end of his genius. Next he turns to the story of Elise Lester, brought to the island after the first family has left so that she and her husband can care for the sheep and try to buy the land from the owner.  Her husband also relishes the peace and quiet to recover from shell shock suffered in World War I. The second family is as chipper and cheerful as the first is sad and resentful.

Where Marantha saw only the constant wind and the blowing dust, Elise sees beauty and opportunity. In their twelve years on San Miguel Island, the Lester family adds two little girls to their family, and their life progresses from once-a month supply ships to an airplane dropping in supplies; from loneliness to being overwhelmed with visitors; from isolation and quiet to the constant noise of the radio broadcasting news of War.

While the natural landmarks on the San Miguel Island are the same, minus the sheep, the two houses described so vividly in the novel are long gone. I’ll wager that the novel will leave you wanting to explore San Miguel Island on your own.  The larger question, still rattling around in my mind, is “How would I react to living on an island out of touch with the busy world I know?” and “Would I be an Elise? An Edith? A Marantha?”  “And how much of your happiness depends on the person you are sharing the life with rather than the place? ”

That’s what good novels do–they leave you thinking. And this is a very good novel indeed.

Travel to the San Miguel Island and the Channel Islands

The National Parks web site will fill you in on various methods of transportation to San Miguel Island and the other Channel Islands.

Start in Ventura, California, where the park headquarters is located, and where you will depart for the islands.

Take what you need with you, because there are no stores on the islands.

If you are spending a night or two–you’ll be camping.

The NPS leads hikes and dives.

But if you can’t get to the Channel Islands in person, you can watch videos of live hikes and live dives.  Here’s the archive of past hikes and dives on video, and you can find the times when you can watch a live hike or dive on your computer at the same website.

Here’s a look at what what it would be like to visit San Miguel Island  today. A 7-minute video on You-Tube.

The photos here are in the public domain and acquired from the NPS Channel Islands website. A link to Amazon is an affiliate link, which means that if you purchase something from Amazon through links on this page, you will be supporting A Traveler’s Library (even though it costs you no more to shop that way).  The book was provided to me by the publisher for review, which has no effect on my opinion. I tell you what I think.

My April trip took me to Fredericksburg Texas, and also to the Lyndon B. Johnson  childhood home and the “Texas White House”, his ranch on the Pedernales River in beautiful Texas hill country. Blue bonnets were in bloom, and we were reminded of the legacy of Lady Bird Johnson. Although we could take photos inside the childhood home, the National Park Service does not allow photography inside the ranch house. But here are the photos I did get.

I was grateful to Lady Bird Johnson that she had the foresight to pack things away whenever she did updating of the house, so that it could be returned to the look it had when LBJ was there. All that 1960’s aqua-green Naugahyde! LBJ had a wall of three TV sets in his office, a reminder that you could get all the news on just three channels in his time.

I also loved the typical LBJ stories. In the garage, beside the impressive Presidential cars, was a little funny-looking car, like a Nash Rambler, if you’re old enough to remember them. He would load it up with guests, and drive it toward the river and start yelling that the brakes were failing and they were going into the water. Okay. It was an amphibious automobile, quite comfortable floating in the Pedernales.

And how Lady Bird and LBJ lived together all those years is a mystery. She had refined tastes, and liked to decorate in country casual, but with polished furniture and nice pieces of art.  She got a beautiful dining room set with chairs carefully matched to the table. However, one day, LBJ dragged one of his overstuffed leather cowboy chairs in to the head of the table. There it stayed beside the telephone that was attached to the table in case he got a call during dinner. Both totally out of place in the lady-like decor.

He had nearly 70 phones installed around the ranch so he would never miss a call. Wouldn’t he have been in heaven with a Blackberry!

I used to wrinkle my nose at his down-home paeans to Texas hill country and his beloved Pedernales. But by golly, standing there on the lawn of the Western White House and looking past the bluebonnets  and across the road, through the live oak trees  at the narrow strip of muddy water across the road, I could totally understand why he spent more than 1/3 of his Presidency in this lovely spot.

The humble childhood home seemed similar to the white clapboard homes in small town Ohio where I grew up, although this was a generation older and I never actually had to put up with an outhouse. The most striking thing about that small house was learning that his mother taught elocution to the town children on the front porch after regular school. Her love of literature and poetry and public speaking fills in a gap in my knowledge about LBJ.

The homes and the surroundings go farther in explaining the President than any biography could ever do.

Have you visited LBJ’s home or other President’s homes? What do you get out of the experience?

Other slide shows of Texas: San Antonio on My Mind, and the Art and Food of San Antonio.

Disclaimer: I went there on a press trip as the guest of the Fredericksburg Convention and Visitors Bureau.