Once again, My Itchy Travel Feet, the premier blog for traveling boomres, is sharing part of Ken’s and my Southern Road Trip. It is kinda like Donna is asking me, “What did you do on your summer vacation” and then publishing my answers.

Of course I was blown away by the house and its decor, as I describe in the article, but I also was in awe of the fact that George Vanderbilt and his team were responsible for the birth of modern forestry in the United States.

In case you missed it, My Itchy Travel Feet also shared my suggestions for three ways to see the Great Smoky Mountains National Park by car.

The first time I visited The Great Smoky Mountains National Park, both of us were babies. In 1936 the park was born. In 1939 I was born. In September 1940 President Roosevelt dedicated the park.In the summer of 1941, I visited the park with my parents, grandparents and great aunt. In June 2015 I’m back.

This is a picture of my daddy and me on that long ago road trip, but I don’t know exactly where it was taken.(Not in the park.) Do you recognize the monument? 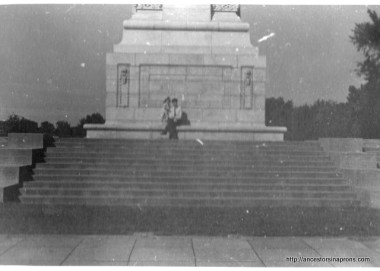 We entered the park from Gatlinburg, and stopped at the Sugarland Welcome Center. A short nature trail there provides a good intro and you can get maps and booklets and great temptations in the gift shop. From the welcome center take the drive that goes out to Cade’s Cove. You’ll see wildlife..We just missed a family of bears …And many of the buildings of the farming community that existed here before the park displaced them.

By the way, bears are very aggressive this summer, so heed the warnings and use common sense.

The next day, we followed the shorter loop out of Gatlinburg called Roaring Fork, a stunningly beautiful drive through light and shade streaked trees forming cathedrals of nature with the road as the central aisle.

Then we headed up the mountains to the highest point, Clingman Dome. Along the way we had plenty of opportunity to see views like this. (I took this one a couple of years ago from a cabin.)

We climbed the 1/2 mile trail (300’gain in elevation) to the observation tower and huffed and puffed.

Although the mountains have not changed perceptively since FDR and later a baby VMB visited, there are, fortunately, more and better roads and facilities and unfortunately man-made haze sometimes obscuring the “smoke” of low hanging clouds for which the area is named.

We were at the Smokies during the high tourist season and on a weekend so cars lined up on the roads and finding a parking spot took great patience. But still, the peace of nature will soothe the soul of anyone who has had to cope with Pigeon Forge, in my opinion a town to be avoided.

Three towns line up along the highway called Parkway, north of the park itself. At the top, Sevierville, then Pigeon Forge, then Gatlinburg. Pigeon Forge is the home of Dollywood, a downright charming amusement park that outclassed the endless row of tacky entertainments in the town. In town, you can eat dinner while watching lumberjack compete. Bungee jump above the chaos of downtown. Drive on mini race ways. Eat at every fast food joint known to man or at pancake houses vying to be the hokiest.

On one section of parkway, I amused myself as we crept along in bumper to bumper traffic by jotting down the restaurants in a row…broken up only by one chain motels along the way…
McDonald’s
Golden Corral
I HOP
Wendy’s
Arby’s
Long John Silver
Burger King
Denny’s

A veritable convention of healthy eating!

Gatlinburg, although plagued with similar crowds, has less garish entertainments. The very nice Aquarium, for instance and an impressive convention center. Gatlinburg is also known as a craft center and in general just seems more grown up than Pigeon Forge.

So where did we spend two nights? Because I was being a cheapskate and didn’t like the prices of cabins, we stayed in the non chain Inn at the River in (blush) Pigeon Forge. It was, however a very nice motel with a balcony overlooking Little Pigeon Creek with big trees and little ducks and entertaining geese. You could almost forget the madness out on the street. Particularly with a new and delightful seafood restaurant, Harpoon Harry‘s next door.

I was a bit depressed thinking about all those families dropping hundreds of dollars on amusement park stuff and probably never savoring the natural beauty of the surrounding Great Smokies. But then, if all of them descended on the National park, we would never have been able to drive or hike in peace. So keep up the good work, Pigeon Forge.

In parting, here’s one of those photos parents take solely to embarrass their children. Me, going, on my first road trip.

The first four nights of our Southern States Road trip have been what I fondly think of as “unchained”. Instead of picking a familiar chain motel,we went with alternatives.

We have used VRBO several times for multi-night stays, so it was not a great leap to try AirBnB. The only question was, would they have digs for people past the couch surfing stage. We really did not want to share a house or apartment.

It was reassuring when I went to their easy-to-use web site and found that was their first question. Their selections are not as numerous in the “whole house” category, but we found this tiny efficiency cottage (aka converted garage)with rave reviews for it and the owners.

We searched the area around Holiday Florida and got many suggestions. Two places I marked for possible disappeared by the following week, and this was 2 months in advance of booking, so don’t shilly-shally.

One in nearby New Port Richey came with WiFi, the right location for us, a kitchen in case we wanted to eat’at home’ and an overgrown garden/lawn in which to relax. 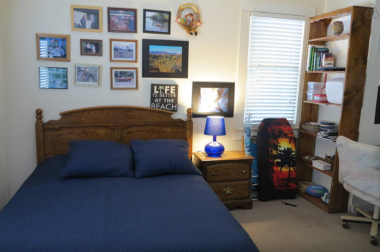 The bed was smaller than we are used to, but for 3 nights we could survive. We were delighted with how completely it was equipped—far better than the 200 a night Paris apartment. The hosts were as lovely as their previous guests claimed. She’s from Finland and spends summers there. He’s a traveler and photographer whose photos liven the walls.

When I mentioned that the only thing missing was a place to hang clothes, he unlocked a closet for me. (Most guests are there for fishing or the beach, not to go to a wedding, as we were, so the closet is mostly private storage space.)

The neighborhood is mid century Florida bungalows surrounded by towering live oaks trailing their Rapunzel-like Spanish moss decoration. The town is down at the heels, seeming to have more closed than open businesses. We did enjoy waking to Capozi’s Diner for breakfast one day, but headed further afield for other meals. Busy Rt 14, paralleling the Gulf, hosts every chain motel and restaurant known to America.

The beautiful beaches and wild life preserves are everywhere around you, but it is easy to miss them in the freeway traffic. When we asked a native Walgreens clerk for directions to Green Key park which edges New Port Richey along the Gulf, he didn’t have a clue.

He probably didn’t know tourists were staying a couple blocks away in a residential neighborhood, either.

Bottom line: Air BnB is a good alternative to chains if you want something with more character and like to stay in a residential area. Their web site gives very complete information. Don’t assume every place will be cheap. They carry pricier places as well. I would not hesitate to use them again.

Pictures are from the owner, posted at http://www.AirBnB.com