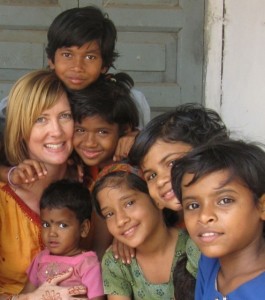 Book: The Weight of Silence, Invisible Children of India by Shelley Seale

Today, I am going to give you part of the e-mail inteview I did with Shelley, and later, I will return with more about her book and her reading recommendations for travelers to India. Shelley supported the charity, Miracle Foundation, and her first trip to India was as a volunteer for that group. I asked her how that made her experience different than that of an ordinary tourist.

Shelley: I think it probably did  create quite a different experience than I would have had otherwise. Caroline Boudreaux of The Miracle Foundation did an excellent job of preparing us for the culture shock of India, as well as for the children and the volunteer work. Of course, it can never be fully described and you can never be fully prepared for it – I remember how overwhelmed I was at first, both by the country and the sea of children who surrounded me the first night I arrived.
India was the most alive place I had ever been – it wrapped me up immediately and refused to let go. It still hasn’t.
In India everything is on full view, nothing is hidden – both the incredible, magical beauty and the frantic poverty that does not let you rest.
Its rawness of life strips away the unnecessary – distractions, superficial attachments, trivial worries. … life becomes fundamental, only the essentials of being, and causes you to be fully present in your own existence.

— far too easy to be shuttled from place to place, safely cocooned in cars and five-star hotels from which they gaze out at the spectacle passing before them. They dutifully traipse around the Taj Mahal and Varanasi with their video cameras before returning home, perhaps with the feeling that they’ve missed something essential. But they never really saw India.

I asked what she thinks about  slum tours and how she liked the movie Slumdog Millionaire.
The filmmaker Mira Nair (The Namesake, Vanity Fair) made a movie in the 1980s called Salaam Bombay, about a bunch of street kids very similar to those in Slumdog Millionaire. Like Slumdog, she used actual street children in the film, not actors. They were paid and trust funds set up for them, and then she used the proceeds from the movie to start a non-profit called Salaam Baalak Trust with her mother, Praveen. I interviewed Praveen Nair for my book. SBT works with street children and helps rehabilitate them, providing clothing and education and other resources. Now, in Delhi and Mumbai, actual SBT graduates lead visitors on tours around the city and show them the real heart of these places, not just the tourist stops.

I myself went on such a tour in 2007, with Deepa Krishnan of Mumbai Magic tour company. Deepa had introduced me to the nonprofit Akanksha, which I profile in the book. They provide schooling for kids living in slum communities, and Deepa donates a third of her company’s profits to the organization. Deepa took me to Dharavi, the slum where much of Slumdog Millionaire was filmed and widely regarded as the largest slum in Asia. It was an incredible, eye-opening experience. She introduced me to women making pappadam bread while their toddlers hopped around them, and men making clay pottery by the hundreds. Dharavi gave me a resounding rebuttal to the myth that poverty is the result of laziness. I have never seen people work so hard in all my life. The place abounded with an industry and entrepreneurship such as I have not ever witnessed anywhere else. It was an amazing experience, and I believe that things like this can do a lot to eradicate cultural bias and misunderstandings, and also the images of poverty that many of us have.

Deepa herself said it best when she explained it to me. “This is the Mumbai of the aspiring migrant, with his fierce drive for survival, for self-improvement,” she said. “The Mumbai of small enterprise. The Mumbai of poor yet strong women, running entire households on the strength of their income from making papads. Every morning, these women put food on the table, braid their daughters’ hair, and send them to schools. Dharavi is one place where this third Mumbai is visible. They have hope for the future, you see? This is the Mumbai of dreams.”

I loved the movie (Slumdog Millionaire). … But what most people don’t know is that there are 25 million kids living in India under circumstances like those portrayed in the movie. For these kids, this is their everyday reality – without the fairy tale ending.

Our guest today is Monica Bhide, a fine writer and an expert on Indian food. Her latest

work is Modern Spice. Monica wrote a moving essay on her blog which was posted at Facebook after the terrorism attack on Mumbai. I knew that she might have some different ideas than those I came away with from Slumdog Millionaire.

I was not born in Mumbai nor did I grow up there. I have never lived there for longer than a few months at a time. And yet, as a writer, it is the destination that I have written about the most.

I have written love stories in yearning for the city’s seafood, I have written essays on my Mumbai-based idols, I have written pieces on how to shop in Chor-Bazaar, the Thieves Market, what to order at the Taj and the craziness of the fish markets. Mumbai has given me inspiration, it has given me dreams, life-long friends, a zest for learning the local language so I could understand all the bad words being hurled around by street kids, and it gave me the love of my life – my husband.

What is it about this city that makes everyone who lives there call it “Amchi Mumbai” (My Mumbai) and what is it about this city that makes people like me lose their hearts somewhere between the street food vendors and the glamorous shopping arcade at the Oberoi?  The short answer is the people. They have a spirit and a love of life unlike I have ever seen. They have a determination to make their city thrive, no matter what.  And I think this is what was central to Slumdog Millionaire.. the spirit of the people, it is why the movie succeeded, I believe.

To your question of not wanting to visit after you saw the movie, well, I can understand why. But if you feel that Mumbai is only about those slums, you couldn’t be more wrong.  Yes, there are slums in Mumbai, but that is just one part of the city. There are also glorious monuments, fantastic eateries, and places where the real estate is more expensive than in Tokyo. That is also Mumbai.  Mumbai is India’s nerve center, much like New York City is to the US.

There have often been comparisons made between the two major metros: they are the financial capitals – NYC has Wall Street, Mumbai has Dalal Street; they have major populations – Mumbai was 14 million at last count; they are melting pots of cultures and languages; they are home to major food establishments and businesses; they are cities where dreams come to build a life; they are places where even wanderers can find a home.

There are differences:  Mumbai is also the host for India’s movie industry, has strong religious undercurrents, and yet Mumbaikars are equal opportunity devotees and the Lord Ganesh offers his blessings to one and all, religion not withstanding; and monsoons still define the way of life.   I have seen movies about gangs in NYC, about the people who live under the city.. that does not stop me from wanting to visit what I consider to be an absolutely glorious city – I just stay away from the areas that I feel l don’t belong in or want to see particularly.

Next Monica tells us about her encounter with one of those areas of Mumbai that deeply affected her.

I am happy to announce that Monica Bhide will respond to the post on Slumdog Millionaire and slum tours. Monica is a native of India and loves Mumbai, so we hope to learn from her a different point of veiw about visiting that Indian city. And accomplished writer of books and articles, Monica also writes a food and culture blog called A Life of Spice.

She says of herself: ” I love tradition but embody change.
I respect technique but am playful.
I eat locally but cook globally.
My writing reflects food and culture and its affect on our lives. ”

Come back Friday to see how Monica Bhide adds spice to our conversation.