This is a prison story, a story of generations repressed and rebelling and being punished both by the regime and by their own internal struggles. It is the story of parents and children and family secrets.  It is the kind of story that can only be told by witnesses–or those to whom the witnesses first tell their stories. END_OF_DOCUMENT_TOKEN_TO_BE_REPLACED

END_OF_DOCUMENT_TOKEN_TO_BE_REPLACED

Books for Troubled Times in the Middle East 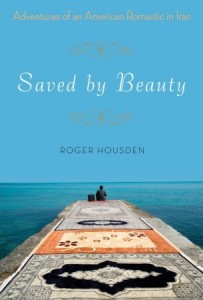 Book: Saved by Beauty: Adventures of an American  Romantic in Iran (NEW May 2011) by Roger Housden

Roger Housden‘s Saved by Beauty combines an enticing travel guidebook with a philosophical memoir as he travels in Iran, seeking the beautiful culture he first fell in love with (at a distance) as a student.

If I am right, and poetry provides the key to Westerners understanding The Middle East, particularly Iran, then Roger Housden will be the perfect person to unlock that meaning.

Before visiting Iran, he wrote several books about poetry, including one about Rumi, a revered Iranian poets of the 13th century. So in 2007, about to turn 60, he sets off with Rumi in his pocket to find what he calls the other Iran.  What he finds confounds some of his prior assumptions about a deeply complex society.

The book has a chilling prologue in which police interrogate Housden about his real reasons for being in Iran. This scene sharply contrasts with the world he plunges into when he arrives in Iran.

This is a pilgrimage to ancient poets and contemporary artists–to the intellectual, expressive part of a culture that in America generally conjures up only forbidding images of the Ayatollah and “Kill all Americans” slogans.

As he visits the ornate grave of Omar Khayyam, best known in the west for The Rubaiyat (verses) of Omar Khayyam, his guide points out, “We have no memorials to soldiers or generals…We have our poets and saints, and each of them has his story.”

We learn that Omar was much more than a poet. He was a philosopher, a scientist, a mathematician and an inventor.  Housden muses,

“…I asked myself why a one-thousand-year-old Omar should matter to us in the first decade or so of the twenty-first century.  Even if he was the Einstein of his time, there have been hundreds more bright stars since then. But it was not the sum of his particular achievements, impressive as they were, that moved me… His poetry and his science contribute to something greater still…”

“The human spirit runs like a current down the line of the generations, binding us all in a rolling wave of continuous story.  In Iran, this sense of shared history is in the air, and people breathe it in as their daily bread.  It nourishes them in a way that we, in our transient and disposable culture, can barely begin to imagine.”

Housden’s biggest self-realization comes when he, who thinks of himself as apolitical–simply a seeker of understanding–realizes that there is no such thing as apolitical. “Art itself was a political act. The book I was writing, whether I saw it that way or not, was necessarily a political act.”

Despite the difficulties of travel to this country and a frightening episode referred to in the prologue, after reading Housden’s irresistible descriptions of Iran you may decide to travel to this amazing land.

Unlike many foreigners who never get outside of Tehran, he introduces Isfahan, a city of great beauty, with the blue domed mosque that called him to Iran to start out with– just one of many in the city. He goes to Shiraz, the city of roses and wine and the tomb of the poet Hafez. He visits the ruins of once great Persian cities, Pasargadae and Persepolis. He talks to people about Zoroastrianism, the religion founded by Zarathustra and Sufism,  Rumi’s religion, known in the west for mystical Dervishes.
The variety of religion and cultures and depth of history  is overwhelming and alluring. I could not help thinking throughout, however, that I was glad to read about some of his experiences that simply would not be possible for a woman–particularly a foreign woman.

I will leave it to you to discover how that interrogation turns out, because I would like to lure you into adding this lovely book to your traveler’s library.  Meanwhile, I’m off to gather some poetry by Hafez and Rumi to continue my Iranian journey.

You can see Roger Housden talking about his book in this book trailer at YouTube.

Disclaimer: Broadway Books/Random House provided me with an uncorrected review copy of this book. Photo of book cover is from publisher’s page. All others are from Flickr and you can find out more about the photographer by clicking on the picture.

NEW: The New York Times reviews Saved by Beauty in their summer reads, travel section. (and two other books that have been reviewed here.)

If you had an opportunity to travel to Iran, would you? If yes–what would you want to see? If not, what would stop you?