Best Town Ever...Outside Magazine list of best towns for outdoors living has Chattanooga going down to the wire with Port Angeles Washington. 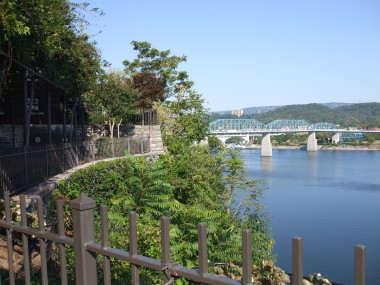 I’m in Chattanooga for the second time, and confirming that it tops my list of this country’s smaller cities. Chattanooga follows the curves of the mighty Tennessee River.

Walking along the River downtown, or through the neighboring Bluff Arts District, we watched joggers, walkers, bikers– everyone, it seemed on the move. And on the river people paddle their canoes or kayaks. Up on the mountain they can hang glide or zip line. The vibe is colorful, casual, active. This seems to be an Eastern outpost of the California lifestyle. 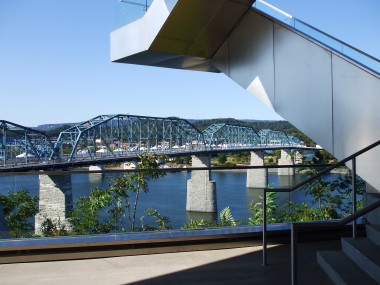 With only about 170,000 people, Chattanooga has some amazing cultural attractions as well as the outdoor parks. The stunning architecture of the Hunter Museum of American Art stands next to the original building, a historic mansion. Both hug the edge of the cliff over the river. A walk through the art district is a visual delight with sculptures in unexpected places, like the old man and child in front of the Chocolate Maker. The chocolatier, by the way is considered one of the artists you can watch at work.

Down below the buff more glorious architecture houses the Tennessee Aquarium. Buildings and institutions like these exist because Chattanooga is home to some very big businesses, making everything from Volkswagens to Moon Pies and more. 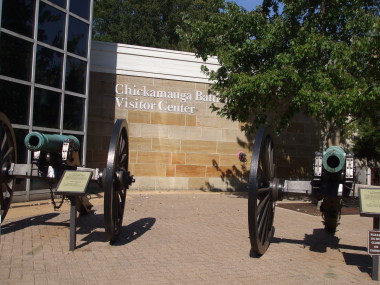 The transportation routes of river, rail and roads also made Chattanooga a key prize during the Civil War. We took a caravan ranger-led tour of the National Military Park of Chattanooga, after visiting Battles for Chattanooga, a sound and light show played out on a mini battlefield. This commercial site is next door to the Point National Park on top of Lookout Mountain, from which you can look down on the fields of battle where the Rebs under Gen. Bragg fought the Union’s young Gen. Ulysses Grant. 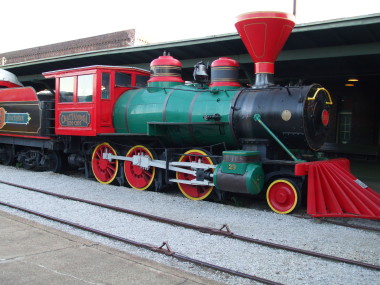 You can ride a scenic railroad, see the hokey Chattanooga Choo Choo, but most people come for Lookout Mountain. Not so much the historic sites we were interested in but a climb through giant boulders at Rock City or a visit to awesome Ruby Falls–a waterfall deep underground. 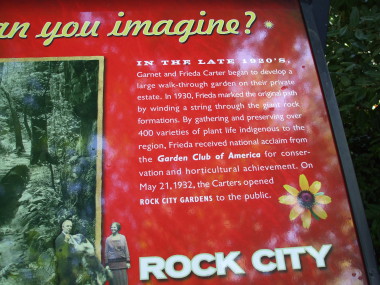 As I write this, I don’t know who Outside Magazine chose, but Chattanooga will always be Best City Ever to me. NOTE: To see who won, check the Outside web site.

If any president of the United States were actually born in a log cabin, it should have been Andrew Jackson. And that was the story. Alas,  the story is untrue.  You will learn about that, and how many slaves he owned, that he had a pretty fancy house on 1120 acres. You’ll learn more fascinating stuff about Andrew Jackson when you visit The Hermitage, the Jackson home near Nashville, Tennessee. Yes, there was a log cabin. Yes he did once live in it. The family had to retreat to a log cabin while they waited for their house to be rebuilt after it burned in 1837. END_OF_DOCUMENT_TOKEN_TO_BE_REPLACED

As you know, I sometimes wander away from A Traveler’s Library, and appear on somebody else’s website. I have three I want to tell you about today, and hope you’ll enjoy my wanderings. 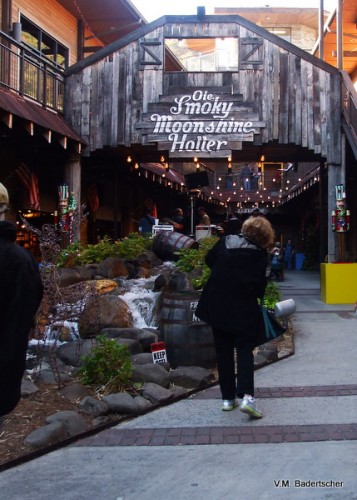 In Tennessee, I discovered that Moonshine has come out of the woods. At Perceptive Travel, I relate surprising things I learned about the traditions of Moonshine whiskey when I visited Gatlinsburg, Tennessee. You’ll see a whole bunch of my Tennessee pictures there, too.

I am still amazed to learn how popular this stuff is. Moonshine is so trendy that Discovery Channel has just completed Season Two of a show called Moonshiners!! So do come over to Perceptive Travel and see what I learned in Tennessee.

The site Travel Freak.net (not to be confused with .com, which is a whole different place) invited me to share my experiences in Spain during Semana Santa. I was not only in the best city for Holy Week, I was at the best processional, on the most important night, watching the most beloved figure of a the Virgin during that week of 60 or so processions in Seville.  When people ask about my most memorable experience, this one definitely is on the list. Learn how you can have this amazing experience. (By the way, we had a camera mishap while in Spain, so what you’ll see at Travel Freak.net, are gorgeous photos used with the permission of other photographers. The one here is mine, from another town in Spain.) [UPDATE: Sorry, but that story seems not to be available any more]

Finally, I shared ten tips on visiting my home town of Tucson here last week, but it is now also available at Knok.com, the homeswapping site. Although you may have already read my ten tips, if you’re thinking of looking into home swapping, you’ll have to go to Knok to see what’s available in Tucson.

THIS JUST IN: So proud to say A Traveler’s Library has been featured and recommended at Janet Given’s site. Take a look.