Where: The Meadowlands, New Jersey

Brooklyn was never known for its rural landscapes — though there are many of them, if you know where to look — but when I was growing up there I knew of a place that made my hometown seem pristine: The Meadowlands. The vast, swampy section of northwest New Jersey, a wasteland that you could see from Manhattan, had a reputation as a dumping ground for everything from toxic chemicals and refrigerators to — we believed — dead bodies, possibly even that of teamster Jimmy Hoffa. END_OF_DOCUMENT_TOKEN_TO_BE_REPLACED

Books: Your choice from a bushel of books

[I wrote this about New Orleans after a visit when I took a literary tour with Kenneth Holditch, long-time resident and expert writer on Tennessee Williams and New Orleans. Unfortunately, Dr. Holditch is no longer giving literary tours on request. However if you are there during the Tennessee Williams Festival, he is scheduled to lead tours then, or at least is as I write this in 2018, when he is 85 years old. ]

Kenneth Holditch, called Professor by his friends, knows every café, bar, waiter, and historic plaque in the Quarter. Retired from New Orleans University, Holditch walks through the French Quarter pointing out the nesting places and watering holes of writers who once lived here and talks about the latest crop of literati. 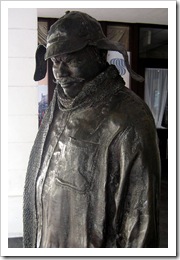 When I went with him,  Holditch started his tour with a statue on Canal Street, the commercial avenue that separates the French Quarter from the business district. Not many cities raise statues to imaginary people, particularly a pudgy fellow wearing a hunting cap with earflaps. But a bronze Ignatius Reilly, the outrageous hero of The Confederacy of Dunces, waits under a clock just as he does in the opening scene of the novel. By the time John Kennedy Toole’s book had achieved Pulitzer Prize fame, the author had committed suicide. Holditch says, “I think he captures New Orleans, the accents and the different language patterns—from the Irish Channel to the Faubourg Marigny.”

Absinthe House (still in business) drew the likes of Mark Twain, O. Henry, Walt Whitman and Oscar Wilde. A few decades later Sherwood Anderson attracted friends who started literary magazines and a tradition of pens dipped in southern atmosphere. Gertrude Stein, Ring Lardner and Carol Sandburg came to visit. But many authors stayed and made this their home.

Since my tour guide, Kenneth Holditch was also a retired professor, he handed out a reading list at the end of the tour. His list of 65 authors covers a couple of hundred years and included Walker Percy, whose The Moviegoer is must reading for New Orleans fans. John Biguenet’s short stories in The Torturer’s Apprentice captures the spirit. Mystery writer James Lee Burke joins others including Julie Smith, Barbara Hamblin and Christine Wiltz who spin tales of murder and mayhem in the Big Easy. Anne Rice’s vampire sagas, set mainly in Louisiana, work their magic on thrill-seekers. Rice’s followers still celebrate at a Hallowe’en Ball, even though Rice herself has moved on to new forms of expression.

New writers move in as fast as old writers move out, and a fan of New Orleans could keep reading them until the lamps go out in the Vieux Carré.

on the National Historic Register, has always served as the hangout for literary figures. The Monteleone family has hosted many writers—Tennessee Williams, Truman Capote, Ernest Hemingway, Eudora Welty and William Faulkner. More recent guests include Winston Grooms, the creator of Forrest Gump, and Pulitzer Prize winner Richard Ford (Independence Day). Many of the authors included the Monteleone in stories, prompting the Friends of Libraries USA to name the hotel a Literary Landmark. That honor has been bestowed on only three other hotels—New York’s Plaza and Algonquin and San Antonio’s Menger Hotel. Monteleone is a good place to stay particularly for book lovers.